Home Resources Bono and David Taylor: Beyond the Psalms 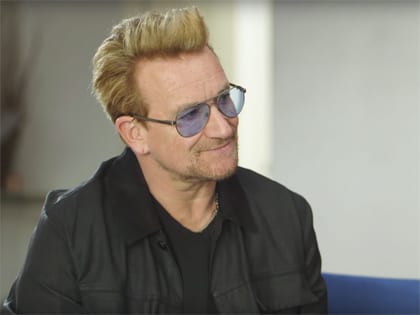 In a five-part video series, musician Bono shares about how much the Psalms have influenced him.

“We don’t have to please God in any other way than to be brutally honest; that is the root not only to a relationship with God but the root to a great song … or any work of art of merit.” —Bono

On the first year anniversary of FULLER studio, we reflected on our inaugural conversation on the Psalms between author Eugene Peterson and musician Bono. In celebration, we are pleased to offer five new, exclusive videos from an additional interview conducted subsequently in New York.

It was Bono, reflecting on his earlier conversation with Peterson in Montana, who requested more time to express how much the Psalms have influenced him. Below, Fuller Texas professor of theology and culture David O. Taylor interviews Bono in the gallery space belonging to Makoto Fujimura.

To learn more about studying with David Taylor and Fuller’s Brehm Center for Worship, Theology, and the Arts visit Fuller.edu/Brehm.

Parts 2 through 5 of the interview can be viewed here.

Virus Protection Resources for Your Church

The Joy and Crown of Pastoral Ministry