Home Resources Is the Bible Good for Women? Unpacking 1 Timothy 2 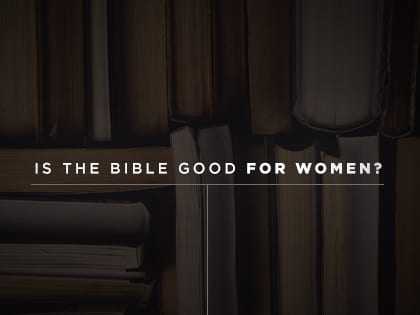 “The way we see the Bible affirm women enables us to recognize inappropriate limitations on women in the church.”

First Timothy says, “A woman must quietly receive instruction with entire submissiveness. But I do not allow a woman to teach or exercise authority over a man, but to remain quiet. For it was Adam who was first created, and then Eve” (1 Timothy 2:11-14).

We can approach this passage several ways. One way does not view the Bible as a connected whole. According to this perspective, Paul’s instruction contradicted previous passages in Scripture, and his instructions then were relative to only the particular culture in which he was teaching.

Or one might teach that this passage is absolute because it is among the final instructions of Scripture, and the examples throughout Scripture of women doing more than what Paul seems to suggest here are tossed out as obsolete. Without using the Bible as commentary on itself, we end up either writing off this passage as irrelevant or interpreting it so strictly that women are forbidden to use their spiritual gifts in the church in any way.

But we are approaching Scripture as a unified text in which each progression in God’s story reflects both the past and the future. According to this view, Paul was reinforcing something long believed and taught from Scripture that is still relevant today, so we can use the rest of Scripture to reflect on this verse.

Deborah was one of the judges of Israel: “Deborah, a prophetess, the wife of Lappidoth, was judging Israel at that time … The sons of Israel came up to her for judgment” (Judges 4:4–5, NASB). Judges exercised martial and military leadership in Israel before the kings. Deborah is also called a prophetess, though her role as judge was different from that of the prophets who spoke the words of God, according to Deuteronomy 18:18.

Priscilla discipled men in cohort with her husband: “[Apollos] began to speak out boldly in the synagogue. But when Priscilla and Aquila heard him, they took him aside and explained to him the way of God more accurately” (Acts 18:26).

Phoebe was a deacon, according to Romans 16:1: “I commend to you our sister Phoebe, a servant of the church.” The Greek word for “servant” is also translated “deacon” in 1 Timothy 3.

I keep these particular women in mind when reflecting on 1 Timothy 2 because Scripture affirms each of them. Even Paul himself, who wrote these verses, specifically affirmed Phoebe and Junias.

From Outreach Magazine  Christopher Yuan: Holy Sexuality and the Gospel

Other passages help us determine what this authority refers to. First Timothy 2 doesn’t mean that women were not to speak in church at all since other Scriptures make it clear that women spoke in church settings at times without rebuke (see Acts 18:26; 21:9; 1 Corinthians 11:5). This verse also doesn’t say that women should never informally teach or disciple men, because Priscilla clearly did that.

It doesn’t mean that a woman is never to be a civil authority, for then Deborah would have been in violation of this passage. First Timothy 2:12 does mean something, though. If I write it off entirely, I stand to lose a lot more in Scripture than I gain from my view of women’s rights.

You could say it acts like a funnel. It is similar to saying that since 50 is not enough, neither is 40, 30, or another lesser number. In the case of 1 Timothy 2, since women are limited from teaching, they are also limited from exercising the spiritual authority spoken of in 1 Timothy 3. The context of this passage matters. It is written in the middle of instructions on appropriate corporate worship and feeds right into the qualifications of elders or overseers in the church.

Given the examples of women affirmed in Scripture who were discipling or speaking, it makes sense that the teaching Paul discusses in 1 Timothy 2 is clarified by the phrase exercise authority. This passage is written in the context of New Testament church authority structures, and the instructions in 1 Timothy 2 bleed neatly into those pertaining to elders and deacons in 1 Timothy 3. Since teaching in worship is limited for women, according to Paul, exercising the authority of an elder must be as well, since teaching is a part of that role in the church.

Because teaching with such authority is not inherent in the office of deacon, it makes sense why Paul does not limit women from serving as deacons and affirms Phoebe in that role in Romans 16. Note the progression of thought in the verses when the two chapters are put together:

I do not allow a woman to teach or exercise authority over a man, but to remain quiet. For it was Adam who was first created, and then Eve. And it was not Adam who was deceived, but the woman being deceived, fell into transgression. But women will be preserved through the bearing of children if they continue in faith and love and sanctity with self-restraint. It is a trustworthy statement: if any man aspires to the office of overseer, it is a fine work he desires to do.

Without examining other Scripture, I might think that Paul meant that no woman could ever disciple a man. But I see that Priscilla explained the way of God to Apollos. I might think Paul meant that a woman could never talk in a church setting. But according to 1 Corinthians 11:5, he allowed women to both pray and prophesy in the church. When we read Scripture together as a coherent, connected story with one part reflecting on another, a fairly consistent image of God’s good plan for women in the church emerges.

This passage is in the context of corporate worship and the qualifications of church elders. God created two genders, distinct but overlapping, to reflect His image in the world. There are distinctions in the church, particularly relating to the spiritually authoritative role of elder, or overseer, which Paul reserved for men.

Is this passage good for women? We are called again to consider our definition of good here, for many would not see goodness in limiting women from the office of elder in a church or from teaching with spiritual authority in corporate worship.

But if we value the distinctions of gender as part of image bearing as much as we do the overlap, we are equipped to consider that maybe God has something good to communicate to us even through such a limitation.

The way we see the Bible affirm other women enables us to recognize inappropriate limitations on women in the church. Congregations should wholeheartedly use women in every way that Scripture allows, not out of begrudging duty but because the church needs women this way to bear God’s image into the world.

Adapted from Is the Bible Good for Women? by Wendy Alsup Copyright © 2016 by Wendy Alsup. Excerpted by permission of Multnomah, a division of Penguin Random House, LLC. All rights reserved. No part of this excerpt may be reproduced or reprinted without permission in writing from the publisher.

Wendy Alsup is the author of Practical Theology for Women, The Gospel-Centered Woman and By His Wounds You Are Healed. She began her public ministry as deacon of women’s theology and teaching at her church in Seattle, but she now lives on an old family farm in South Carolina, where she teaches math at a local community college and is a mother to her two boys. She writes at TheologyForWomen.org and GospelCenteredWoman.com.