Home Resources Do Muslims and Christians Worship the Same God? 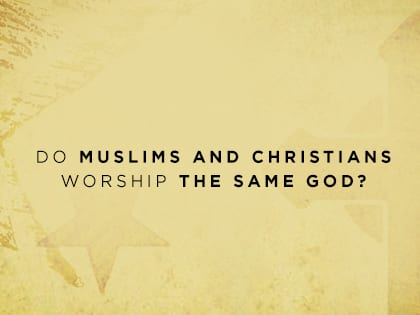 “Ultimately, when we understand the Trinity, we realize that this doctrine is not just a theological curiosity.”

In April 2015 I had an opportunity to encourage Christian students to reach out to their Muslim neighbors. It was a chapel service at a Christian college in upstate New York, and at the center of the mostly Caucasian audience was an Iraqi woman clearly distinguishable by her hijab, the headscarf that Muslim women commonly wear.

I have learned the hard way that, whenever I address an audience, I should try my best to present my message without offending people more than I have to. If people are going to find the gospel offensive, I would rather it not be on account of my presentation. So for the allotted hour, I was trying to read her reaction to my arguments and testimony, but she showed no reaction whatsoever. She simply listened. At least she was not obviously offended—so far so good!

At the very end of my presentation, a woman in the audience asked me a controversial question: “Do Muslims and Christians worship the same God?” My answer to this question had offended Muslims in the past, and I was worried it would do so again. But another thing I have learned the hard way is, when asked a question, I should try to answer it directly. So I offered a quick prayer in my heart and began.

I started by stating the obvious: Christians worship Yahweh, the Trinity, whereas Muslims worship Allah, a monad. This is not an incidental difference; Islam makes every effort to condemn the Trinity as blasphemy (4.171). The Quran rejects the relational aspects of God, saying that he is not a father (5.18) and he is not a son (112.3). It establishes its own doctrine of God, tawhid, in diametric opposition to the Trinity, and that doctrine becomes the central doctrine of Islamic theology.

Most people who say Christians and Muslims worship the same God are aware of this difference, but they treat it as relatively inconsequential. This is not a trivial difference, though; it has major implications. Since mankind is made in the image of the triune God, love is woven into our very nature. The Trinity gives us the most consistent, most powerful basis for being self-sacrificial and altruistic.

This is an important point to unpack. Of course, many people are very altruistic, regardless of their worldviews. A person does not need to believe in God to genuinely care for others, as secular humanists demonstrate. There are even people who do not believe in any kind of morality yet still desire to care for people. Ultimately, though, such ungrounded altruism is a sentiment, something a person just want to do. Unless one believes in a transcendent basis for altruism, one’s desire to care for people is unanchored and ephemeral, little more than a whim. According to this amoral worldview, nothing behooves a person to be kind. Even though someone might wish to be altruistic, in the next moment it would be entirely consistent with their worldview if they chose to be selfish.

From Outreach Magazine  Prepare for 2021 by Finishing 2020 Strong

Others believe in a morality that is essentially derived from evolutionary theory. People ought to take care of one another because the enterprise of life is to survive, and we ought to be mindful of other members of our species. Although this is a somewhat more grounded basis for altruism, it is ultimately still a weak foundation: Why should I, a thinking individual, subscribe to the enterprise of life? What if I do not want humanity to survive? Furthermore, is it really altruistic of me to care for others if my main purpose in doing so is to care for my own species, and by extension, to care for myself?

So atheistic altruism, though it may be sincere and practicable, is ultimately either sentimental or utilitarian and selfish. To root altruism more firmly, one needs to consider theistic models. In the case of Islam, Allah commands Muslims to take care of orphans, widows, paupers, wayfarers, and others. A Muslim can obey out of selfish purposes, such as a desire to avoid hell or obtain heaven, or he can obey out of a selfless desire to please God. So theism, as in the case of Islam, offers a more deeply grounded form of altruism.

But the Christian model of theism goes further still. Much further. Remember that the eternal love of God is intrinsic to who he is; each person of the Trinity loves the others selflessly. It was out of this selfless love that God created mankind. In other words, we were made in the image of a selfless, loving God, so in our very nature we are designed to be selfless and loving. When we are self-centered instead of selfless, we act against our very nature.

No other worldview so deeply embeds into mankind the obligation to love and care for one another. As a foundation for altruism, nothing outstrips the Trinity.

So I answered the woman’s question by emphasizing that Christians worship a triune God, and that this makes a great difference in how we see ourselves and the world around us. Shortly after my answer, the Iraqi woman approached me. With a thick Arabic accent, she thanked me for my talk, and with a thick American accent, I thanked her in return for listening so patiently. I asked what brought her to the Christian college, assuming it had been a Christian friend. Her answer gave me more than I bargained for.

She responded that, just five weeks prior, she had seen Jesus in a dream. He told her to go to a specific church in her town to learn the truth about him. At the church, a woman befriended her and shared the gospel with her. Without hesitation, she renounced her Islamic faith and accepted the good news of Jesus. Since that day, she had learned all she could about God, and when her friend found out I was speaking at the Christian college, she brought her along. It was her friend who had asked the question about whether we worship the same God!

From Outreach Magazine  This Year’s Best Book on Racial Reconciliation

So it turned out that the Muslim woman in the audience was not Muslim after all, but a new Christian sister. Out of curiosity, I asked her friend why she still wore a hijab, to which her friend responded they were so busy discussing Jesus that they had not yet had the opportunity to talk about it! I was very glad to hear that answer. There is nothing inherently wrong with a headscarf, and focusing on it would be a waste of time in comparison with learning the truth about Jesus.

The question of whether Muslims and Christians worship the same God is complex, and there is much more that could be said. Ultimately, when we understand the Trinity, we realize that the doctrine is not just a theological curiosity. It has far-reaching implications for how we ought to live and how we see the world, and it makes the Christian God categorically different from the Muslim God. It is what makes God relational, what makes his love eternal. It is how God can be in us through the Holy Spirit, while being over us as the Father, and suffering for us in the Son.

And it is the Son that most distinguishes the Christian God from the Muslim God. We need to learn about him not only in light of the Trinity but also in light of his life on earth. Now that we understand the doctrine of the Trinity, that the one God subsists as three persons, we will better understand what Christians mean when they say that the second of the three persons entered into this world as a human named Jesus.

No God But One: Allah or Jesus? A Former Muslim Investigates the Evidence for Islam and Christianity
By Nabeel Qureshi (Zondervan, 2016)

A 2016 OUTREACH RESOURCE OF THE YEAR
Category: Apologetics

Dr. Nabeel Qureshi is a New York Times best-selling author and an itinerant speaker with Ravi Zacharias International Ministries. Since completing his medical degree in 2009, he has dedicated his life to spreading the gospel through teaching, preaching, writing and debating. 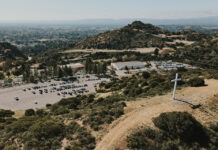