Home Resources Put Your Fists Together and Pray 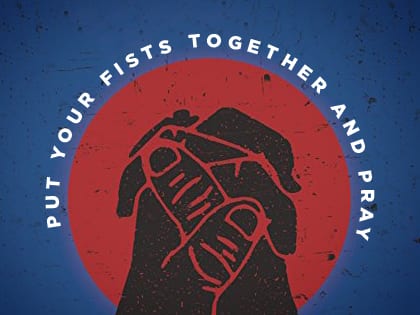 “Miracles happen. But between such mountaintop moments, we must all traverse the predictable valleys of the mundane.”

The Bible is clear that we are engaged in a vicious spiritual battle, in which God’s purposes are contested constantly. Prayer (in which we harness our wills with God’s will to resist Satan’s will) is our greatest weapon of defense as well as attack. People sometimes ask why God requires us to pray, as if it were merely a form of relentless begging: “please, please, please” in the tone of a child beseeching his father for a treat, or a football fan wishing like mad for a goal in the final minute. But to pray is not to plead from the sidelines; it is to invade the field of play. In prayer we join the team, actively shaping the outcome of the match, challenging and occasionally outplaying an aggressive opponent (Revelation 12:10–12). Martin Luther went so far as to describe prayer as “a constant violent action of the spirit as it is lifted up to God, as a ship is driven upward against the power of the storm.” He continues:

Thus we must all practice violence and remember that he who prays is fighting against the devil and the flesh. Satan is opposed to the church … the best thing we can do, therefore, is to put our fists together and pray.

It can be troubling to recognize the militancy of prayer and the level of authority we may wield to affect the outcome of spiritual battles. But the truth is this: There are terrible evils that will only be restrained, and wonderful blessings that will only be unlocked, by our prayers. “You do not have,” says the apostle James very simply, “because you do not ask God” (James 4:2). The Lord’s purposes are contingent upon our prayers because he has chosen to work in partnership with our free wills. He has not made us automatons preprogrammed to do his bidding. He is love, and love liberates, love trusts, love risks, love collaborates. It does not dominate, control, coerce, or enslave.

The Creator is still creating. He invites those made in his image to join him in imagining and forming the future—new songs and movies, new scientific theories, innovative businesses, revolutionary social policies, brilliant computer games, medical breakthroughs, recipes for soup. In the words of the great French philosopher Blaise Pascal, God has “instituted prayer … to impart to his creatures the dignity of causality.”

One of the most confounding miracles we’ve experienced in more than fifteen years of continual prayer involved a much-loved Swiss prayer warrior called Susanna Rychiger. She relinquished the prospect of a senior post in her successful family business to pioneer a 24-7 community in the beautiful Alpine town of Thun. One day the Lord spoke to Susanna, directing her to move into a particular, strategically located apartment in the center of town where she would be able to reach out to many of the neediest people. The rent on this new apartment, however, was way beyond Susanna’s modest budget, so she cut back on all luxuries and began to pray for provision daily, claiming the promise of Psalm 55:22: “Cast your cares on the Lord and he will sustain you; he will never let the righteous be shaken.”

If I had known about Susanna’s financial challenges at that time, I probably wouldn’t have asked her to consider flying to South Africa, at her own expense, to represent 24-7 at one of the first meetings of the Global Day of Prayer. I certainly wouldn’t have promised her so casually that God would provide the money for her flight if he wanted her to go. But Susanna, being a godly woman, just smiled and promised to pray about it. Almost immediately someone did indeed offer to fund her trip.

The meetings in Cape Town furthered an important friendship with those who organized the Global Day of Prayer, so it’s easy to see why God had so speedily provided the funds for Susanna to attend. But of course, while she was in Cape Town, Susanna continued to pray for the money to pay her rent back home.

A friend called Rebecca was house-sitting Susanna’s apartment while she was away. Deciding to clean the place before Susanna returned, Rebecca went to the cleaning cupboard, opened the door, and gasped. Thousands of Swiss francs lay scattered around the boiler and over the floor. Why was Susanna hiding so much money while pleading poverty? Why had she left it like this, strewn across the floor? Why hadn’t she put it in a bank like everyone else?

Understandably perplexed, Rebecca piled the bank notes neatly in the corner of the cupboard, scribbled a note asking Susanna to call, and went home to her parents wondering what to do.

“Did you find the money?” asked the voice on the phone, without any introduction, when Susanna finally called.

Unsure what to think, Susanna initially opened the door of the wrong cupboard. The voice on the phone redirected her, and she gasped at the sight of the cash. With her mind reeling and her hands trembling, she knelt to count 14,000 Swiss francs—half a year’s wages. Could Rebecca be playing some kind of game? No, because Susanna knew for sure that she didn’t have that kind of money. And even if she did, why would she leave it like that or decide to give it in such a convoluted way? Rebecca was clearly just as freaked out as Susanna.

Maybe a generous friend had secreted the bank notes in her cupboard while Susanna had been away? It was a lovely thought, but since Rebecca was the only person with a key, this would have involved breaking into the apartment. Why would anyone go to such lengths when they could easily just post it through the door, or make an anonymous payment into her account? No one would scatter money in a weird little cupboard, especially while someone else was staying in the house. It didn’t make sense.

Perhaps the previous tenants had left the money there? Quite apart from the fact that people tend not to forget that much cash, Susanna had been living in the apartment for several months, had obviously often used the cleaning cupboard, and knew that the money certainly hadn’t been there previously.

Susanna carefully searched every nook of the tiny cupboard in case the cash could somehow have been hidden for some time, but there was no way it could possibly have been missed.

The bank told Susanna that no one had reported the money lost. The police said that it hadn’t been stolen. Nobody could explain how it had appeared in her house. In the end there were only two possible explanations: “Either the world’s most confused burglar had broken into my apartment and deposited thousands of francs in my cupboard before leaving without a trace, or God really had heard my cries for provision and made the money materialize in my cupboard.”