Home Resources Loving Your Literal Neighbor as Yourself 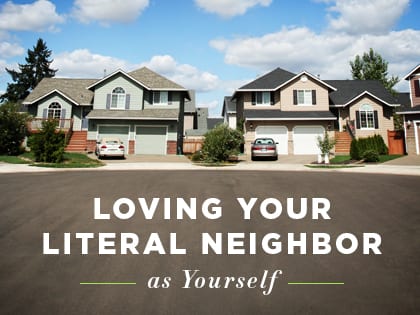 “It is natural for us to share what we have and know with friends. But Jesus takes it to an entirely different level.”

My Saturday morning golf outing was placed on pause. Our peaceful weekend morning had come undone by the sound of cries from the house beside ours coming over the phone. It was the young wife’s birthday, and her husband had just loaded his boat and left for a fishing trip with his buddies. The young woman couldn’t believe her newlywed husband had not planned to spend the day with her. And now Sherri was crying because she was crying.

“Well, I don’t know what to do,” I told her. “If I knew him I would try to thump a little advice into him on how to be a decent husband.”

Sherri wanted to do something—anything to help—so she decided to send the young woman an anonymous bouquet of flowers with a card that said, “Happy Birthday. Know you are loved.”

That was eighteen years ago. We had not yet learned a lot about making a neighborhood livable. I am ashamed to say it, but we were too busy planting a church and raising our kids to view our neighborhood as a place we were called by the Lord and sent directly to reach and make better. We chose to live in our neighborhood based on how it would serve our personal wants and needs. We failed to realize that opportunities to bring something better to our neighbors—and have our own lives affected—were all around us.

But I remember thinking how different this neighbor crisis was playing out in comparison to something similar I was privy to as a child. Countless times growing up in a middle-class suburban neighborhood in the mid 1970s, I had been shooed out of the house so my parents could talk our neighbors through a spat or crisis.

My parents were raised in an era when neighbors actually knew one another. I am still baffled by the fact that one of my parents’ first dwellings included a shared bathroom situated between two apartments. According to my mom it was not that uncommon back in the day. Contrast that to nowadays, where it is not unusual for people to live next door to one another—for years in some cases—without even knowing each other’s names.

Every so often we witness the extreme of this phenomenon, as a news story surfaces about a deceased person being discovered in a home or apartment, having been dead for months or even years. With no pattern of regular interaction, neighbors went on with their lives, not noticing the “missing” person. Their deaths were missed because their lives were missed.

The business of neighboring was enormously important to Jesus. He was the consummate people person, and he gave his followers a clear mandate on the matter.

Jesus was frequently cajoled and pestered by religious leaders attempting to trap him in theological arguments. One day one of these guys got more than he bargained for when he asked Jesus how he could inherit eternal life. It was almost as if he was just waiting for that question. A thought bubble above Jesus may have said, “I’m so glad you asked.”

The religionist who asked Jesus about eternity didn’t have a problem with Jesus’ answer—up to a point. It is just that last little bit—“and your neighbor as yourself”—he wanted clarity on. But his motives were clear: Luke says he wanted to justify himself. To do so he needed to keep the definition of neighbor in the realm of the ethereal. To go literal with this idea of loving our neighbor would be too invasive and impractical. These must only be theological “beliefs” to be agreed with, not real-world commandments to be practiced.

It is easy for anyone to claim that she loves God with her all and all, because God is unseen. How can you tell whether a person really loves God or not? This is the problem our flesh usually has with Jesus. He actually means what he says. So the questioner wants him to define neighbor. Jesus is more than happy to oblige.

Jesus replied, “A man was going down from Jerusalem to Jericho, and he fell among robbers, who stripped him and beat him and departed, leaving him half dead. Now by chance a priest was going down that road, and when he saw him he passed by on the other side. So likewise a Levite, when he came to the place and saw him, passed by on the other side. But a Samaritan, as he journeyed, came to where he was, and when he saw him, he had compassion. He went to him and bound up his wounds, pouring on oil and wine. Then he set him on his own animal and brought him to an inn and took care of him. And the next day he took out two denarii and gave them to the innkeeper, saying, ‘Take care of him, and whatever more you spend, I will repay you when I come back.’ Which of these three, do you think, proved to be a neighbor to the man who fell among the robbers?” He said, “The one who showed him mercy.” And Jesus said to him, “You go, and do likewise.” (Luke 10:30-37, ESV)

Now the guy is really in a pickle. Jesus says the question we must ask is not, “Who is my neighbor?” because if that were the case then we could pick and choose who gets our love. We could go about our days qualifying or disqualifying who is eligible or deserving of our love. Jesus says we must ask ourselves, “Am I a neighbor?”

We are struck with the classic wisdom Jesus expressed in this passage. The characters in the parable are two top-of-the-religious-heap guys (a priest and a Levite) and a bottom-of-the-heap Samaritan—the most despised person in the eyes of the religious Jewish elite.

Let’s not miss the point that this entire scene unfolded when the theologian asked Jesus how a person finds eternal life. The almost exclusive understanding or assumption of this passage is that the lawyer was asking, “How do I get into heaven when I die?” If that were indeed the question, however, then Jesus would be giving a formula on how to earn our salvation; the cross would not even have been necessary.

Church Design in the Age of Social Distancing

3 Steps to Experience God’s Best for Your Ministry

The Mystery of Our Salvation