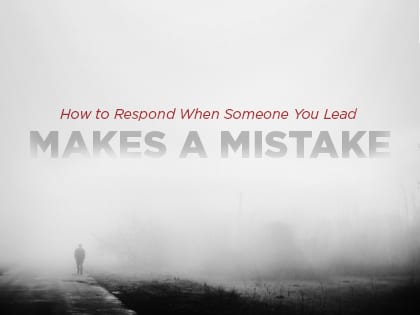 Perry Noble: “When someone we lead makes an honest mistake, we have three options.”

When someone we lead makes an honest mistake, we have three options.

When leaders lose their temper and go off on someone for messing up, they create a culture of fear. In this kind of environment, people rarely live up to their potential, and it’s almost impossible for a team to meet its goals. Leaders who constantly play the yelling card end up revealing more about their own shortcomings than those of the person they’re screaming at. They’re showing a serious lack of self-control, and leaders who lack self-control always end up leading the team into chaos and dysfunction.

We Can Go Silent

Some leaders stop talking to the individual who made the mistake. Instead of addressing the issue head-on, they do everything they can to avoid the offender.

Unfortunately, this was the way I used to cope with people who made mistakes. I wouldn’t return their calls or e-mails, and I wouldn’t speak to them when I saw them. I wanted them to suffer because of how badly they’d screwed up.

This behavior from a leader creates a culture of manipulation and uncertainty. If leaders don’t deal with a situation, people aren’t able to move on and learn from their mistakes, and eventually trust erodes between the leader and the team.

Thankfully I discovered that this style of leadership wasn’t helping our team move forward; it was holding us back and placing us under a cloud of doubt. I found that it was much healthier (for them and for me) to confront the situation in a spirit of honesty and love.

From Outreach Magazine  God Commands Us to Preach His Word

No matter what kind of organization or team you’re part of, making a mistake can be an opportunity to learn. I can honestly say that some of the best leadership lessons I’ve learned have come as the result of my own stupidity, carelessness, and immaturity.

When a leader’s first reaction to someone who has made a mistake is “Let’s see what we can learn from this” as opposed to “Go clean out your office,” there’s so much more relational equity and buy-in from the entire team.

One of the most powerful questions to ask ourselves when one of our people has messed up is “What do I want for this person as a result of what just happened?”

If we want to use the situation to prove a point to everyone else, then we are using people.

If we want to create fear in the team, then we are manipulating people.

If we want to use this mistake as an excuse to bring back all the stupid things that person has ever done, then we are making them look worse so we can look better.

But if we want to produce a sense of security and honesty in the team, then we are leading people well.

Taken from The Most Excellent Way To Lead by Perry Noble. Copyright © 2015. Used by permission of Tyndale House Publishers, Inc. All rights reserved.