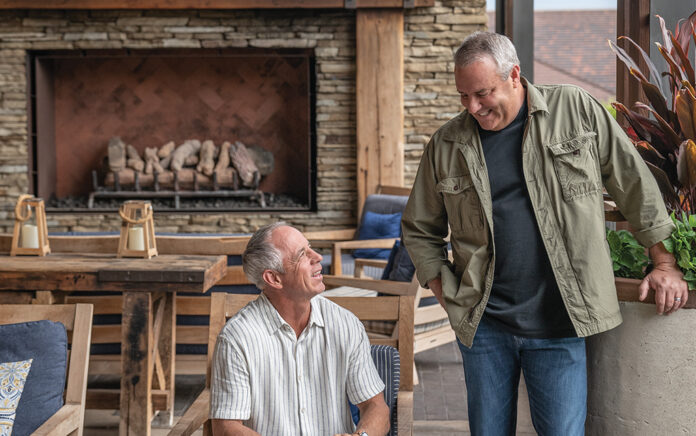 Growing up in the heart of Cajun country outside Baton Rouge, Louisiana, brothers Randy and Rick Bezet never imagined they would both become pastors of two of the largest churches in America—Bayside Community Church in Bradenton, Florida (No. 65), and New Life Church in Conway, Arkansas (No. 49), respectively.

They freely confess that a shared preoccupation with getting past third grade kept them from pondering God or much else beyond that. Growing up, church was irrelevant when it wasn’t terrifying. Along with some friends, on many sunny Sunday mornings, they would often skip threats of eternal hellfire in exchange for sodas and candy at the corner store.

The only real connection either of them felt toward God was the same: the loving influence of their grandmother, the first born-again Bezet, who always answered the phone, “Jesus loves you.”

At the start of God’s unlikely call into ministry—a childhood vision for Rick, a drug overdose for Randy—they both resisted.

“We felt like we were not good choices,” Randy says. “Still, God picked us.”

From the perspective of pastoring churches in the Deep South, they speak of the irony between a shared distaste for big to pastoring two of this year’s largest churches. With a back-and-forth comic timing, Rick and Randy share a story filled with the unexpected, a new post-pandemic reality, the necessary difficulty of truth and love, as well as fresh possibilities for outreach.

Most importantly, they speak of a wild, unexpected, joyful journey always guided by the compass of their grandmother’s words and actions—Jesus loves you—leading to true north.

Two brothers, pastors of two of the largest churches in America. Did you ever imagine such a thing growing up in Louisiana?

Randy Bezet: My goodness, man, we were clueless.

Rick Bezet: I like it; let’s start with the easiest question to answer: We had no idea we would both pastor churches, much less answer questions for Outreach magazine.

You both managed to get past third grade.

Randy: We both went into ministry instead. [Both brothers laugh.] Let’s put it this way: I’ve always been a little slow on the uptake.

Rick: I always tell people it takes Randy two hours to watch 60 Minutes. [Both brothers laugh] But back to your question about imagining ourselves as pastors. First of all, you have to be a Christian.

We were raised in a family that went to church, but our dad was running pretty aggressively away from God. The church was just a place we had to go. I didn’t even really see myself sitting in church after I got into college.

Randy: Our family went to church because of our grandmother, who was the Christian matriarch of the family. Obviously, Rick and my journeys have been very similar. At the same time, there was a big age [gap]—Rick is seven years older than me. Our experiences were different in terms of station of life.

When I was 13, and Rick was a freshman in college, and I was dutifully at church, bored as always, I had a vision of going into ministry. I saw a sea of people. I wasn’t just preaching, I was seeing people being healed, saved, marriages restored, delivered from drugs, bondages and alcohol. And everyone was being filled with the Holy Spirit. All of those things were happening simultaneously. I didn’t know what to do with that, so I kind of put it off to the side.

From Outreach Magazine  Preaching Hope in the Midst of Despair

Randy: We grew up in a very fundamentalist kind of church. We didn’t like it too much, right? Rick, tell him about your Sunday school teacher.

Rick: It was a very judgmental church. There was like a prerequisite [that] to go to that church, you had to be mean. And the meanest person in the church was my Sunday school teacher. I was eight, and she hated me. She would point her finger at me, and I remember it being like 30 feet long. She would say things like, “Hell is hot, hell is hot, hell is hot.” She talked about hell like she was born and raised there.

Like I said, she didn’t like me much. We started going to another church on the other side of town with people who legitimately loved God.

Given such a dismal church upbringing, how did you stay open to the idea of ministry?

Rick: It was the mark of our grandmother. I will tell you we have never met anyone who loves the Lord more than her or who was more kind. We always had a healthy perspective on the love of God because of her.

Rick, tell me about the start of your calling.

Rick: I was a professional golfer playing tours and a way better athlete than my brother. I had just become a Christian, and I felt the Lord speaking to me. One night on tour, I was asleep and God literally woke me up. He gave me the name of a man—David, the father of a girl that I was dating—whom I was trying to but also resisting sharing the Lord with. I don’t hear God’s voice much, but I did that night.

I called David. He was tough; he would literally strike a match on the palm of his hand to light another cigarette. A few minutes after the start of our conversation, we somehow got disconnected. Later, he called back, crying. “Man, I need Jesus,” he told me, “and thanks for the call.” I led him through the Sinner’s Prayer—the first time I had ever done that.

A week and a half later, the tournament ended. When I walked into my house, my mom told me David had died of a massive heart attack on his way to work. By comparing phone bills, we discovered he had died four or five hours after our phone call. From that moment until now, I always see somebody as a candidate to go to heaven, but somebody’s got to call.

Randy, what happened to the church ministry vision you had when you were 13?

Randy: That vision happened right before we started going to our new church, Bethany World Prayer Center. Bethany was a great church, and still is. I got really involved and started serving the Lord. At the same time, we had a lot of family turmoil. I was in ninth grade when our father left my mother for the last time and moved to California. I was a teenager trying to deal with many tumultuous, unsettled realities, which blurred any sense of calling.

After college, I was a functioning addict and an alcoholic, working in medical sales and self-medicating with anything I could get my hands on. I overdosed on drugs one time. My friends brought me to the emergency room. I was completely gone. The church started praying for me, and Rick came to the hospital and I’m in the ER with the doctors not sure if I would live or die.

Rick: It was pretty hard to see Randy in his eyes; he looked like a shell of himself. I went into the waiting room, and everybody was watching MTV. I grabbed the remote and turned the TV off. “Y’all can’t be watching this right now—my brother is about to die. It’s time to pray.” And everyone got on their knees and prayed for Randy to live. And he did.

So did that bring you back to the Lord?

From Outreach Magazine  Idea Starter: Leave a Light On

Randy: Most people would say, “God just gave you life when you should be dead,” which should serve as an awakening moment. But that is only what smart people do. [Both brothers laugh.]

What finally brought you back?

That’s when it hit me—God has a plan for me. I got on my knees in Rick’s office and prayed a really bad version of the Sinner’s Prayer. That’s the day Jesus became my Lord, not just my Savior. It literally changed everything.

Did it increase your sense of calling to ministry?

Rick: Yes, but one I fiercely resisted. I still wanted to pursue my dreams of golf. I was playing in Orlando, and I was doing really well. I could have won that tournament. When one of my shots landed against a tree root, I thought, You know, I think I can get this shot. After much study, I hit the shot, which broke the club and my wrist. The club then swung over and hit me in the head, knocking me out. All of a sudden, ministry seemed like a possible option.

Randy: It was the best day of his life because it finally knocked some sense into him. [Both brothers laugh.]

Check out Part 2 of our interview with Rick and Randy Bezet where they talk about yielding to their calling, navigating a pandemic, and leading growing churches.

Rob Wilkins, an Outreach magazine contributing editor, is the co-founder and creative lead for Fuse Media in Asheville, North Carolina.