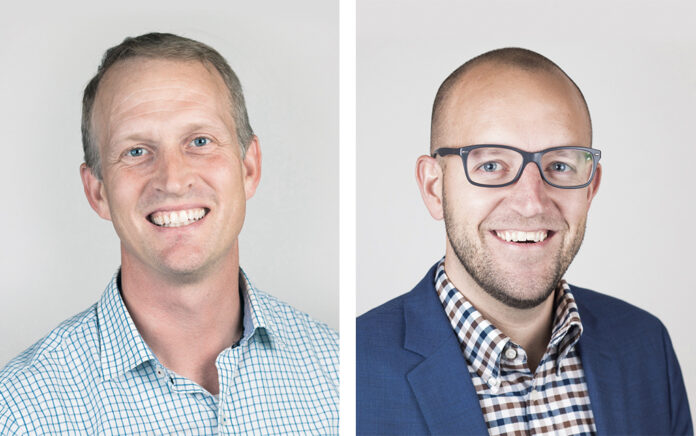 In 1997, the Christ-centered microfinance organization HOPE International began its work in post-Soviet Ukraine. Its goal? Lift up underserved communities by empowering men and women to use their God-given skills to support their families. Today, the organization, partially led by locals in the regions they serve, reaches 20 developing countries in Eastern Europe, Asia, Africa and South America. It provides small loans and biblical discipleship opportunities, offers training and creates a safe place for families to save money.

For more than 15 years, Peter Greer and Chris Horst have served HOPE International with Greer as president and CEO and Horst as chief advancement officer. In that time, they’ve learned about the never-ending struggle coupled with the resilient, faith-filled hope of HOPE’s global beneficiaries. And in April, they released their latest book, The Gift of Disillusionment: Enduring Hope for Leaders After Idealism Fades (Bethany House). The book combines those lessons about idealism and disillusionment with testimonies from Christians around the world who are joyfully engaged in challenging ministry, and who remain faithful to God’s call on their lives despite incredible struggle. Here, Greer and Horst share with Outreach what church leaders can learn about hope and perseverance in times of overwhelming struggle.

What have you learned during your time at HOPE International about idealism, disillusionment, cynicism and hope?

Peter Greer: We felt so much excitement about joining HOPE so many years ago, and about making a positive impact around the world. But there are two things you realize very quickly: One, there is momentum, and there is progress, but it is far more difficult to see positive change than I ever imagined. Two, is the gift of being part of a global organization. There are some who think, Oh, isn’t that great? You’re going to try and serve people around the world. But the missing piece is just how much our global colleagues have impacted and led us through the last couple of years especially. We really want to celebrate the way the global church has actively responded in love to incredible challenge and held on to the faith.

Chris Horst: As we think about Hope’s global operation, this is the reality in the places where we work: Stability is abnormal. Predictability and certainty are not luxuries that most of our global colleagues are accustomed to.

They’ve lived their whole lives with challenge, right? They’re not naïve to it. And when you enter their world, understand that struggle, and your idealism vanishes, you experience disillusionment. Why should Christian leaders view disillusionment as a gift and not something to fear?

Horst: I do think when we encounter disillusionment, there is a negative association. We’re experiencing something that’s causing us to feel a sense of being lost, of that idealism evaporating. In The Preaching Life, Barbara Brown Taylor described disillusionment literally as the loss of an illusion. Disillusionment is an opportunity to say, That conviction or confidence I had was in the wrong place. It wasn’t in God.

I believed I would be able to go in and solve poverty or fix foster care. I’d be able to lead an organization without any sort of challenge. But the reality is that it’s incredibly difficult to lead people well, to raise money, to manage a board, to effectively show a positive impact in the work we’re doing. We face famine and earthquakes and, in a global context, wars. These are real challenges the church has faced for all of time. So we reach that point where the illusion begins to reveal itself as an illusion, and that’s an opportunity to really test where we’re placing our confidence.

“We need to have the expectation that loving people and trying to make positive change will involve pain that we will feel as well.”

From Outreach Magazine  Breaking Free From the Enemy-Making Machine

Where are we placing our hope? How are we defining success in ways that are actually contrary to what God promises? Jesus’ least popular promise to us is that we will encounter trouble. So when we face that illusion [of trouble-free ministry and life] being revealed as illusion, it can do one of two things: It can drive us to cynicism and deconstruction, or it can drive us to dependence upon God and his promises.

Greer: Barna released the results of some research back in October 2021 that is shocking: Thirty-eight percent of pastors are thinking about quitting full-time ministry. Of those under age 45, that number increases to 46%. So talking about disillusionment is timely. The last couple of years have been rough, and we need to name that. This has been a really tough time to be in leadership, and there are a lot of individuals who are saying, Is it worth it? Should I continue?

The way we reframe that sense of disillusionment as a gift is this: The minute you come to the end of your own abilities, when you realize your grit is not gritty enough, when you understand you don’t have what it takes to lead really well on your own, then that becomes a pivot point. You can continue on that downward spiral toward cynicism where you say, Not only do I not have what it takes to do it, but it can’t be done at all. You feel like the problem is just too big, and people are just not capable. It’s a negative inward focus. Or, that disillusionment can free you to say, Maybe the world is not ours to save anyway. Maybe we have a role to play, but maybe our own strength is insufficient.

I think that’s what we have experienced in our own lives. You join hands with others when you realize your need for God and community. Unless he shows up, Haiti is not going to experience a transformation, and without him, there is no path out of the situation in Ukraine that we see. That allows you to realize, in a moment of surrender, that we were never designed to do this on our own anyway.

Talk about how Jeremiah in the Bible exemplifies this faith-filled hope despite incredible adversity. I think a lot of the time the entire book of Jeremiah is distilled down to Jeremiah 29:11, and people cling to it because they hope it means God will abundantly bless their life, but they don’t consider the context of the difficulties Jeremiah faced when God gave him that promise.

Horst: Jeremiah is a remarkable character in our Scriptures. His is the longest book in the Old Testament. He’s the most quoted author in the Old Testament. I mean, Jeremiah 29:11 is everywhere. Most years, it is YouVersion’s most copied and pasted verse from all of Scripture. And yet, when you actually look at Jeremiah’s biography, he’s not exactly who you would look at and say, This is the hero of the Scriptures. He was ridiculed by all his contemporaries, thrown in jail, thrown in a pit to die, betrayed. He oversaw the end of the promise God had given his people. For hundreds of years they occupied the land. Jeremiah presided over its collapse, watched the walls come down around Jerusalem, watched the temple get destroyed.

“Our global brothers and sisters living in places of more fragility, poverty and less freedom can help remind us that certainty and predictability are idols.”

There is so much we can learn from this persevering prophet who was faithful to and reliant upon God, even as everything around him went exactly the opposite of what he would have designed. So I think it’s not unintentional that he is this prominent author in Scripture, because God, I think, through Jeremiah, is telling us, oftentimes, hope and joy and peace and fulfillment aren’t found in the places we would design them to be found. Jeremiah is someone whose testimony is so powerful for this moment we’re living in today. The truth doesn’t invalidate Jeremiah 29:11 or this hope for a future that is promised in those words. Of course, those words are true. It actually makes those words so much richer, because they’re not connected to those circumstantial things we think of when we think about being blessed. Those weren’t things Jeremiah experienced.

What should leaders understand about suffering to help them minister to those in their congregations experiencing it?

Greer: You cannot care about the issues in the world without being hurt by them yourself. Let’s not be surprised when we love and care about individuals, when we try to serve them, and then we experience just a little bit of the hurt they’re going through as well. We need to have the expectation that loving people and trying to make positive change will involve pain that we will feel as well. I think that’s part of the invitation here. It’s part of the upward (not inward) focus: Just imagine what it’s like for others. Enter into that with them, and your own problems tend to get a little bit smaller when your focus is upward and outward, as opposed to inward.

We in the American church can sometimes forget we’re not the only ones who have something to give and to teach other Christians around the world. But what can the global church teach the American church about enduring hardship with a sense of hope for the future?

Horst: I think our global brothers and sisters living in places of more fragility, poverty and less freedom can help remind us that certainty and predictability are idols. They’re not luxuries that God promises we will have in our lives. That is the thing that has come through again and again, both from our global team and walking through the pandemic. When these things that we held to be immutable were pulled away, at least for me personally, I felt really unmoored, like, How can I go on? And our global brothers and sisters are like, Welcome to the party. This is what Monday is like for us.

There is an expectation of difficulty when you look at the disciples of Jesus. They did not have it easy, but they had a clear mandate. They got sent by Jesus to go, but their lives were incredibly difficult. When I read Scripture now, what is standing out to me is that difficulty and pain are the norm. Let’s be surprised on the days when we don’t experience that, and let’s have a little different expectation that we want to get to the end of this life and not be surprised that it was really, really hard. At the same time, we shouldn’t be surprised that even in the midst of that difficulty, there is a hope that is even better than we could have anticipated.