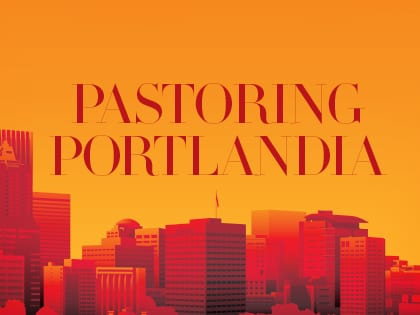 What does it take to shepherd believers in America’s post-Christian frontier? Cutting-edge savvy and old-time practices.

Portland, Oregon, is a place of many names. We are “Stumptown,” remembering the vast clearings early pioneers made in the deep forest. We are the “City of Roses,” the perfect climate for our ubiquitous thorny blooms. We are “Little Beirut” when we protest, “Rip City” on the basketball court, and, my favorite—“Bridgetown”—anytime, for our 11 major bridges, from Gothic St. Johns to the still-gleaming Tilikum Crossing.

Those bridges, tenuous spans across mighty waters, are metaphors for the heart of the place. On paper, Portland is one of the toughest places for Christianity in the United States. Never particularly religious even in the pioneer days, Gallup’s 2013 numbers have Oregon as the fifth least religious state in the U.S., barely trailing deep New England. We’re culturally progressive, an odd amalgam of outdoorsy counterculture, and the epitome of the “anything goes” lifestyle.

At first blush, it’s easy to dismiss Portland as some gritty punk-den of the odd, a kind of Burning Man festival enlarged to the scale of a postmodern city-state. We are a chimera of the wonderful and strange, of all freedoms good and evil. We are the place you will see flaming-bagpipe players on unicycles, naked bike rides of thousands through residential neighborhoods, hipster neo-pagans on the high places. We are the city to sample a new brew every night and never run out, where no one cares about football, but fierce and bloody roller-derby matches are packed and soccer nears European levels of popularity. We are the place where “Reading is sexy,” where Voodoo priests marry Goth couples in doughnut shops, where burlesque shows accompany marching bands, and everything goes.

From Outreach Magazine  How to Lead Imaginative Prayer

A lifelong Oregonian, part of an old pioneer family, this is my place, my people. Depending on who you ask, we either guard the gates of hell or the border of the Promised Land.

Culture here does not support faith, but routinely opposes it, in a kind of one-way pluralism. Christians either wear a hunted look about the eyes, or else have made peace with things, adapting to the soil.

Difficult soil it is, but fertile. And in such a place, beautiful stories are told to those who ask.

Portland’s Christian community is small, but vibrant—with a rare spirit of unity and immediacy. We have our problems, plenty of them, but far from being a huddled group of survivors bunkering up against the swelling pagan hordes outside the church doors, the Christians of Portland are learning to listen for God’s Spirit, build bridges with our neighbors and come together to serve Christ and this city.

There are hundreds of stories here. Dozens of leaders whose wisdom I wish I could share. But today we will focus on two leaders from large and strategic churches in the city, who are gleaning special wisdom and powerful principles as they pastor Portlandia.

Paul J. Pastor is an Outreach contributing writer and author of The Face of the Deep: Exploring the Mysterious Person of the Holy Spirit.