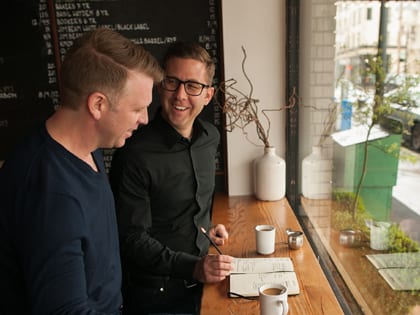 “My concern is that this generation doesn’t hear from their pastors just how much our faith has something to offer to the world.”

In part 1 of the interview, David Kinnaman and Gabe Lyons discuss the impetus behind their latest book and research project, Good Faith, and the growing cultural opposition toward Christianity.

You use the word “we” in the book, referring to the evangelical movement. In the day of Trump, is there still any meaningful “we”?

Lyons: Yeah, there is. It’s not as big as the media and other polling organizations make it out to be, but it’s real. Dave and Barna’s definition of evangelical is narrower than the norm—it actually requires people to seriously hold certain beliefs, and be committed to living them out. It’s not just self-identification.

The “we” we’re describing are those who take faith seriously in their lives. They’re trying to be faithful to what scripture says, but also trying to be forward facing to the world, not isolated in a bunker or under the steeple of their church. They feel that they have social responsibility—to evangelize, and to help their cities flourish. That “we,” represents about 7 percent of Americans.

Kinnaman: And that 7 percent represents just fewer than 20 million people, and doesn’t include a lot of likeminded believers—including most practicing Catholics and some Pentecostals. So, especially considering those similar populations, that’s a huge “we.” By some measures, 1 in 5 Americans.

What we discovered in the research is that there’s a lot of unanimity of belief—commitment to the Bible, belief in the importance of evangelism, often belief in a real spiritual realm—but a lot less agreement around “how” to express that belief. The mainstream media tends to play up those differences—like whom we vote for. So it’s very important to find areas of unity—areas of the “what” and the ‘how” that bring us together.

What are those areas?

Lyons: We talk about them in the book, as five “lenses” that can guide our cultural thinking. They’re Theology, Ministry, Relationships, Politics and Public Square. A lot of Christians are confused about how to relate to the wider world when their beliefs come in conflict with what the culture at large thinks. We try to give a cohesive framework for that, starting with theology.

But once you’re grounded in your theology, there should be freedom within the church on how to express that. We have Christian bakers who are going to bake cakes for everyone, regardless of their lifestyle, because of their Christian beliefs and commitment to love their neighbor. And some Christians may not be able to, based on their conscience. We think there should be room for both. We don’t have to have Christian groupthink around how to express our theology.

Kinnaman: That’s accurate. We go to Daniel as a biblical story rich with meaning for this cultural moment. He’s a wonderful example of faithfulness in a hostile culture. Daniel advocated for the lives of the pagan magicians, his religious “rivals.” He learns the language and literature of Babylon. He becomes a political leader. He’s theologically grounded, oriented around a fear of God, not man. But he’s able to think through his levels of engagement in that society. If we are going to engage our culture for human flourishing, we need solid thinking, not just feelings, around difficult issues.

We can’t just be asking what some megachurch pastors are doing and trying to replicate programs. We actually need to have thoughtful, intentional, personal engagement.

Differentiate this from an updated version of the thinking behind the culture wars. It seems like Falwell-era cultural assumptions would have agreed with the goal of “human flourishing,” but most of us now look back on those strategies as mistaken.

Lyons: Good distinction. Growing up, Jerry Falwell was my pastor. Week in, week out, we heard why we must be involved as a church in culture. But that message was too narrow. The assumption was that cultural change would happen because of political power. We need to understand how culture works, and not exclusively focus on one sphere of influence, or simply “winning.” My approach, as I learn from people wiser than me, is what Andy Crouch says—that culture changes when we create more of it. That’s a calling for every Christian.

Our posture is also very important. The days of us-versus-them communication has had its day. There’s a higher emphasis now on truly seeing the image of God in everyone, regardless of “tribe.” We want to focus on any area, with any person, that we see common alignment for flourishing—any opportunity for common ground, to solve problems together in spite of differences. We’re trying, with excellence, to convey what’s true in any age and apply it to today’s moment, to the questions people are asking today.

Kinnaman: Also, I think the term “culture wars” is hyped a bit. To whatever extent previous generations were focusing on loving, believing and living well, we think they have the right idea, whatever mistakes they’ve made. I’ve had the chance to work with incredible leaders throughout the years. Even when I disagreed with them on the how, we agreed on so much of the what.

It’s tempting to feel that Good Faith is some brand-new approach. But we’re standing on the shoulders of many Christians who have gone before, who have been thinking this way not just for decades but for centuries. It’s being humble, yet confident, confessing our shortcomings, but also advocating a path forward that benefits all of our culture and communities.

Here in my hometown of “post-Christian” Portland, there’s not just irrelevance or extremism perceptions, there’s deep woundedness behind many people’s resistance to Christians. What’s the place of repentance—by Christians, for our past sins and mistakes—in a Good Faith movement?

Lyons: You’re right on. This is a critical piece of trying to re-engage people outside the church. UnChristian was very much about us calling out the church’s self-righteousness, and repentance is key.

We model that in a few of the specific topics in the book—including sexuality for Dave, and race for me. We had blind spots, and needed to face and confess those to move forward. We all need to acknowledge the past honestly and bravely. We didn’t, say, put a whole chapter on confession in the book, but it’s a major implication. Humility and love. We need to call ourselves out for areas where we have screwed up personally, or where the church has dehumanized others. But that doesn’t diminish the good that we’ve done in the past too—or the tremendous potential that Christians have to bring life and love to this culture.