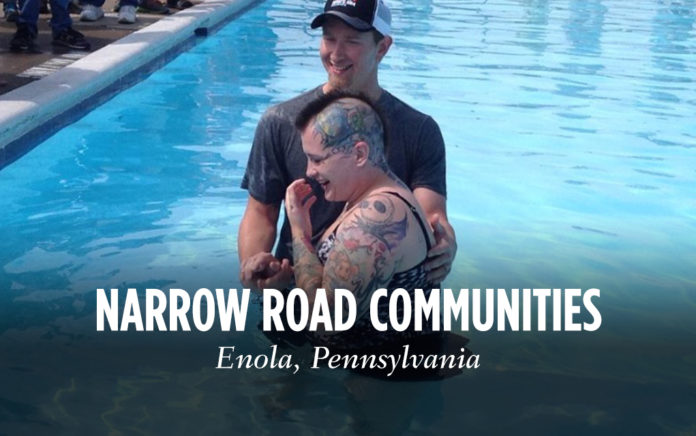 Narrow Road Communities start microchurches by focusing on the mission.

Though Mike Jarrell’s church was growing numerically as people were attracted to the dynamite band, the beautiful gymnasium, the awesome worship center, the on-ground Starbucks, and the hiking trails dotting the property, it was all transfer growth with people coming from other churches.

“We had to work hard to keep up with the momentum, and that fast vibe took me to the most unhealthy and darkest place of my life,” says Jarrell. “I felt very distant from God, and on top of that, all the other churches in the area were shrinking because we were growing, and that made me feel dirty.”

As he looked around, he saw that people weren’t being transformed or growing. They weren’t making disciples or reaching people. And that bothered him.

One day, while attending a leadership conference in San Diego, he went to dinner at the Blind Lady Ale House with a group of guys who called themselves “missional architects.” As this group of pastors and missionaries shared stories, Jarrell felt inspired to do more, be better and think outside the box when it came to discipleship. It was then a neighboring table of atheists began engaging with them in conversation.

At one point, a pastor from Jarrell’s table asked the other group if they minded if they said a prayer of blessing for Jarrell as he was about to get married the following week. One of the atheists said that sounded like a really meaningful idea. Jarrell sat in awe.

“I felt the breaking of bread, prayer, confession and vulnerability, mission, an incredible spiritual dialogue, and the feeling of brotherhood,” recalls Jarrell.

When he returned home, he shared the story with his wife and said, “I really feel like God wants us to do Blind Lady Ale House Church.” She agreed.

Today they call themselves Narrow Road Communities, and they gather in sports bars in and around Enola, Pennsylvania, inviting friends and eventually forming a community that they call a missional action group because they wanted to take action in the world.

“We found all these people who started to share the table with us—the Pennsylvania state director from the American Atheist, heroin addicts,” says Jarrell. “I saw more people in a year come to faith in Jesus by sitting around tables, decks and patios than I saw in five years at the large church I was leading.”

Though it took a while for a healthy community to form, they now have 17 microchurches with 350 connected followers.

“Most of those people are out of the harvest. They didn’t come from church backgrounds, so they have messy stories, but it’s beautiful and invigorating,” says Jarrell. “I feel like I’m no longer running a business but multiplying families.”

As they plant the gospel, churches of all kinds pop up that connect around causes, hobbies and interests. For instance, they have a couple of brewery churches, coffee shop churches and neighborhood churches.

“I love the variety and creativity because the front door will be different for different people,” says Jarrell. “If we start with mission, we’ll see all kinds of churches form. If we start thinking of people we live and work around who share a common passion for something that’s broken in the world, the possibilities for different forms of church are absolutely endless.”

From Outreach Magazine  Peter Scazzero: 'Avoid Being Seduced by the Idols'

“Yet, if you meet them where they are, they’ll sit on your patio, help you strategize how to help other neighbors, allow you to pray for them, engage in meaningful spiritual dialogue, eat a meal together and share things they are struggling with,” explains Jarrell. “Then you begin to disciple them and see a community or church form out of that.”