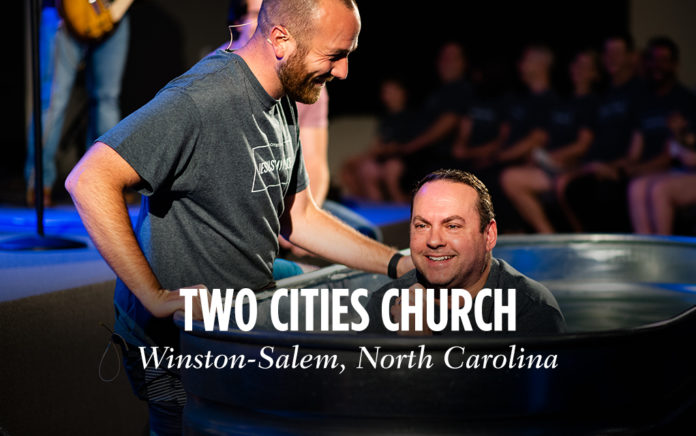 In May 2020, Two Cities Church celebrated four years since a launch team of 30 moved to Winston-Salem, North Carolina, in the state’s Piedmont region. According to Kyle Mercer, lead pastor and directional elder, Winston-Salem is a city with a religious spirit that is very territorial. So, when the team first arrived, they struggled to find a place to meet.

Once they got settled, however, they quickly grew—going from 100 to 600 in two years’ time before relocating to a new building where almost overnight they grew to 900, then to 1,300 over the next eight months.

He partly attributes their growth to their high-commitment culture. “We call everyone to be all in with their time, talent and treasure. This can’t be where you sing songs, get an hour of free childcare, hear an encouraging message and leave. There’s got to be more to the mission and ministry.”

Two Cities has always embraced a “city” vision rather than a “church” vision, and that, too, has helped them grow.

“We want to bring help, hope and the healing of Christ to our city,” says Mercer. He maintains that can’t be done with a church vision in which the leadership is focused on internal ministries. “We want to reach every man, woman and child in the city to give them repeated opportunities to see, hear and respond to the gospel.”

Therefore, Two Cities does a large worship service that includes vision, preaching, sacrament, worship, Word, public prayer and the launching of series and initiatives. They also have community groups, which they view as integral for being in community with Christ. Nearly 1,000 of their 1,500 members are involved in such groups. Finally, they offer DNA (Disciple, Nurture, Accountability) groups that grow out of community groups and consist of three to five people who regularly meet for discipleship.

From Outreach Magazine  5 Reasons Your Church Needs an Easter Webpage

“We have a clear inroad to moving from the crowd to connected to committed,” says Mercer. Pre-COVID-19, they held a Weekender every four to six weeks at which 50 to 70 people would take the next step to get invested in community and serving. It was so popular they filled up several months in advance, living up to the church’s “Better Before Bigger” theme for 2020.

“We wanted to activate and mobilize the scattered church better,” says Mercer. One way was by utilizing technology. When COVID-19 arrived, that’s precisely what they (and all churches) were forced to do—and fast. Prior to the pandemic, Two Cities didn’t livestream, nor did they post the service online. However, Mercer says that for the foreseeable future, and probably forever, they will livestream the entire service and also have it available for people to watch later.

And that makes sense when you consider that people everywhere are streaming everything—from Apple TV to Disney+ to Netflix. “People tell me that they binged my whole series on Galatians,” says Mercer with a chuckle.

While he is thrilled to be reaching people virtually, Mercer is the first to admit that he has struggled not having the in-person contact each Sunday.

“I’ve felt ineffective in ministry because I can’t see the people I’m preaching to and have the 50 conversations I’m used to having between services,” he says. “Plus, I’m a huge extrovert. I’m out there before and after all four services hugging, handshaking, baby kissing. I just love people. And to go through this racism conversation and not get to look at the black brothers and sisters in my church is really hard.”

In the meantime, he holds tight to God’s grace, which he insists is precisely what caused their growth in the first place. “We came at the right time to the right city with right type of church with the right people under the providence of God.”