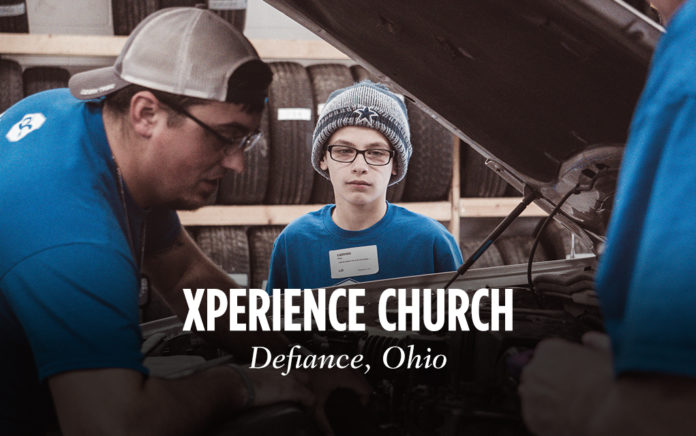 Ohio church has made its mark serving the community.

Kyle Brownlee knows what it is to live behind walls. Having once been incarcerated for a little over three years, he was facing up to five more when a judge agreed he could instead go to a Teen Challenge recovery center where he began the road to freedom.

Today Kyle is co-lead pastor with his wife Justeina at Xperience Church in Defiance, Ohio, and it may come as no surprise that much of the church’s thriving has revolved around one question: How can we go beyond our walls?

Committed to a four-fold ministry concept of being real, life-giving, outward-reaching and Spirit-empowered, Xperience began in September 2012 with a team of 20 people. They met at a YMCA until Dec. 1, 2019, when they moved into their newly renovated 44,000-square-feet facility at a local mall.

It was shortly after the grand opening that COVID-19 hit, and their response perhaps illustrates why the church continues to grow. Instead of just hunkering down, producing some videos and having small groups via Zoom (which they did), they asked the key question, How do we go beyond our walls?

“We partnered with nursing homes and brought them resources and care packages,” Kyle says.

The church also provided meals for health care workers, including paying for food trucks to pull up on-site. It was during this time that two police officers asked when services would begin again as suicide and domestic violence were on the rise and the community was desperate for the church to reopen. The officers were not attendees, which served as a pleasant reminder that the church was fulfilling its vision.

“We didn’t want to just plant a church,” Kyle says. “We wanted to change a community.”

Since Xperience’s inception, they have held monthly service days, doing labor for those in need. They’ve started a prison campus where services are broadcast at the local jail, and they’ve established the Defiance Dream Center that assists the community with workforce development, life coaching and other services such as auto repair for single moms. Since the center’s beginning, the sheriff has told them crime rates have dropped in the surrounding area.

“It’s not handouts. It’s a hand up,” says Leslie Meyer. She began attending Xperience over five years ago and now sits on the Dream Center’s board. Driving from an hour away to attend, she and her husband Ben are planning a move closer to Defiance, primarily because of the church. “Serving [at the church] is our favorite part of the week,” Meyer says.

According to Justeina, Xperience’s mobilization to provide hope for the hopeless is directly tied to reliance on the Holy Spirit who often prompts the “what” before the “how.”

“We have to trust the instinct when we feel like the Holy Spirit is telling us to do something,” she says. “We’ve learned to step out in obedience and take the next step. With the building, with finances, with resources … as long as we said yes, God has provided out of nowhere what we needed.”

Justeina also emphasizes the need to build a platform and not a pedestal, saying people cannot live up to the expectation they think it takes to serve Jesus and be a part of the church. When it comes to being real and life-giving, both Kyle and Justeina agree on the importance of being vulnerable and transparent while offering compassion.

From Outreach Magazine  For Every Easter Attendee, Michigan Church Will Donate $1 to Help With Flint Water Crisis

Meyer would say it is those qualities and more that have made her fall in love with Xperience.

“The church feels like an extension of our family,” Meyer says. “It’s never about the leaders. They’re always pointing people to Jesus and to honoring what God is doing in people’s lives because it’s God who transforms.”