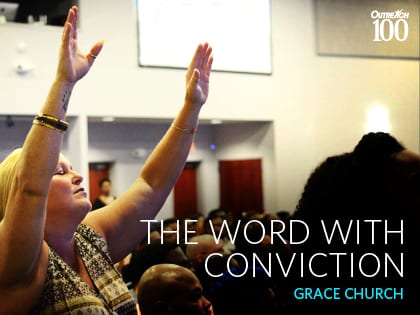 Grace Church of Dumfries, Va., Teaches the Word with Conviction

A married man in his late 30s was having an affair with a member of Grace Church in Dumfries, Va., when he attended a service. A drug dealer who had been selling drugs to his own mother, he gave his life to Jesus. Soon after, he was speaking with the church’s founding pastor, Bishop Derek Grier, when he came to a crossroads.

“He had to make a decision,” Grier said, “Was this going to be something he lived out in his daily life or a hollow experience where he continued to do what he wanted?”

Grier advised the man to end his affair and said if he was going to have an honest relationship with his then-pregnant wife he needed to tell her what happened. He did so, and a month later she had a similar encounter with God. Today they are raising a strong and loving family and have become leaders in the church.

This kind of uncompromising but compassionate approach to leading has helped propel Grace Church to phenomenal growth. In 2007 Grace sometimes had less than 35 people at a service and Bishop Grier and his wife were funding the church. Today they have more than 4,000 diverse members who seem to appreciate being challenged. In the congregation, a naval commander sits next to a blue collar worker. The affluent and the poor become lifelong friends.

“I don’t lower my message to the least common denominator,” Grier says. “A good coach will allow you to go through a little pain to bring out the best in you. People who come here know they have to stretch.” Referring to it as, “teaching the Word with conviction,” Grier notes that he always includes practical applications and steps to take immediately. And as people’s lives are transformed, they become attractive to others.

“The best advertisement is a changed life,” Grier says. “We’re not out to build a big church, but big people.”

In challenging people to grow, Grier notes being authentic is a key to promoting change. “Real people. Real lives. Real change.” is the church’s mission and refusing to put on pretenses is a goal that starts with the bishop. “I am who I am, boils and all,” Grier says. “I try as a leader to be transparent. If I only talk about the wonderful and great things I do, folks aren’t going to identify with me.” Mentioning that we’ve all “messed up,” Grier notes that he’s quick to share the mistakes he’s made and the steps he’s taken to avoid those today. In admitting his mistakes, he becomes free to challenge the congregation from a place of truth and love.

“The goal is to help people understand truth whether they agree with it, whether it sits well with them or whether it’s convenient, and let them personally deal with it,” Grier says. “God is not going to ask, ‘How big was your church?’ He’s going to ask me, ‘Did you teach what I wanted you to teach?’”