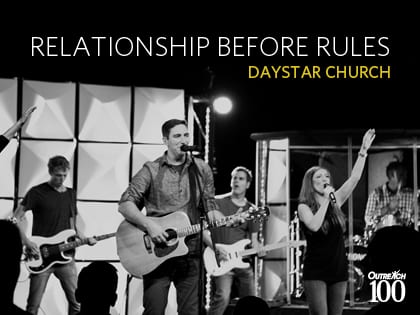 Ian Kitchen learned about by-your-bootstraps salvation and religious rules early on: He needed to be good so God would accept him, he believed, and his long-haired, bearded father was supposedly going to hell for his style and musical tastes.

Kitchen also learned that he didn’t really like “church people.” He “needed the grace part,” he says.

Daystar Church in Greensboro, N.C., was ready to give that.

“When you show up, we don’t start telling you how to fix stuff,” Lead Pastor Allen Holmes says. “That’s really more [God’s] job.”

Their job, they believe, is to reach people and make disciples of Christ. They teach connection: How to talk to God, listen to him, love and value a relationship with him and desire him.

“He irons out the rest,” Holmes says.

Kitchen visited the church down the street from his University of North Carolina-Greensboro campus after his girlfriend finally persuaded him. Kitchen was otherwise “headed completely in the other direction.”

Daystar people welcomed him, seemed to believe what they sang, and when someone prayed for Kitchen, the words seemed divinely inspired.

“I had an opportunity to see what genuine, Christian community looks like,” recalls Kitchen, contrasting it to his Christian middle school where people only seemed to strive for God’s approval.

Some churches take the easy way and give rules, but people can fix behaviors without knowing God, Holmes notes. “That’s what the Pharisees did,” he adds. “We want to reverse that.”

Five years passed before the church, founded in 1997, broke an attendance of 100, according to Holmes. But Daystar’s growth for the last seven years is 35 percent, he reports.

From Outreach Magazine  Bryan Loritts: Diversity Is Not a Fringe Issue—Part 1

“The first five years, I didn’t really know what we were doing,” says Holmes. “We were trying to figure it out step-by-step.”

Encouraging Daystar staff to find two mentors in their positions at larger churches has helped.

But this Holmes knew: Heaven and hell are real, and spiritually speaking, if the building is burning, he’ll do everything to save the people inside it.

“Right out of the gate we knew we had to reach people,” Holmes says, adding that some churches may just drift, pay their bills and “everything is fine.”

Many locals in Greensboro share that “everything is fine” sentiment, a fact Holmes said he learned from a marketing team that Daystar hired. “They said Greensboro was the most complacent place they’ve ever been in,” he explains.

Collins’ book prompted three questions: What is Daystar most passionate about? What can they do better than anybody else? And what makes their numbers work, or, in other words, what drives their economic engine?

Yes, it’s a secular book, but Holmes, who has a doctorate in leadership, said headship principles transcend the environment.

In answering those questions, the church leaders realized Daystar is passionate about their mission, best at providing a culture where people can experience God, and makes its numbers work by the system they created to reach people.

“When you nail those three things down, your church is going to grow. I mean, there’s no avoiding it,” Holmes says of Collins’ questions.

To heighten Daystar’s spiritual temperature, the third main reason for growth, congregants participate in spiritual exercises. They fast and pray for 21 days in both January and August, and read a chapter in Ephesians each week during a sermon series, for example. Around 2,000 people participated in the latter, according to Holmes.

Daystar also took note of the student-heavy Greensboro area, and made services tech-savvy and worship up-to-date. This way, says Holmes, college attendees don’t feel like they stepped into the 18th century.

The church took risks, too. Several Daystar pastors are in their early 20s, and the aforementioned Kitchen is among its young ministers, serving as the downtown campus pastor.

“Ian grew up churched, but didn’t have a relationship with God,” Holmes remarks.

But following Christ—rather than regulations—changes people at Daystar and attracts others to attend.

“If people do go to church, they do want to know God,” Holmes says. “They’re not looking for rules.”