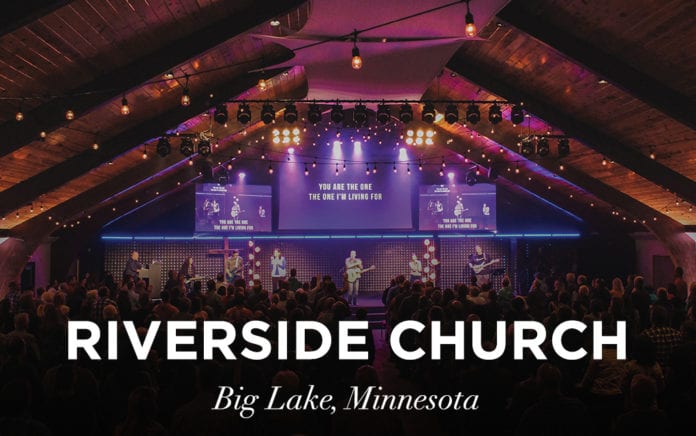 For the first 13 years of their marriage, Matt and Lindsay Marquette were basically unchurched, attending once or twice a year, wherever it was convenient. Their relationship was falling apart, and the future seemed uncertain.

“We had to start over from the beginning,” Matt says, noting that Riverside Church in Big Lake, Minnesota, played a huge part in their restoration. They each gave their lives to Christ through Riverside’s ministry and were baptized together. Today, seven years later, their marriage has been healed, they’ve shared their entire testimony with the church and they now lead a small group.

“When I gave my life to Christ, light bulbs were going off in my head,” Matt says. “I was finding grace, peace and forgiveness. God saved our marriage, and in all that hardship Riverside showed us what it means to be the hands and feet of Christ.”

Founded in 1931, Riverside was in a rural community, but since then the Twin Cities of Minneapolis and Saint Paul have expanded. Big Lake is now on the fringe of the metropolitan area but still surrounded by small towns where 110,000 people live within 10 miles of the church.

According to Senior Pastor Tom Lundeen, Riverside wasn’t always a church that one might describe with a word like “grace.” When he came on board in 2003, it was known as a church with a lot of power struggles and splits, he says. “They had been so wrapped up in legalism, they were like Galatians describes—cats and dogs … wild animals tearing each other apart.”

The church’s history was a roller coaster of growth and decline; when Lundeen arrived, Riverside was stuck. Two of his first objectives were what he describes as a “grace awakening” and becoming “unapologetically an outward-focused church.” He spent a great deal of time preaching on “what grace is, what it means and what grace isn’t.” He and his team also worked hard on developing a culture where people feel safe inviting their friends and family.

“We created an environment where people can trust the preaching, the kids’ ministry, the friendliness of our people and the excellence of the worship team so that they are excited to invite a friend or neighbor,” says Skipp Machmer, executive pastor of programming and strategic development. “We’ve done these things not to say, ‘Hey look at us, look at Riverside,’ but rather because we believe God has trusted us with the people who walk through our doors every week.”

Lundeen believes not everyone is an evangelist, much like not everyone is a worship leader. At Riverside they want to help the 90% of people in the church who don’t have the spiritual gift of evangelism. They encourage every attendee to do three things: pray for their lost friends, share some of their story and invite people to come and see.

“People know they can invite others and they’re not going to be weirded out by a service that is goofy or crazy. They’re going to hear a message that relates to them, and they’re going to see that God cares and is speaking to them,” Lundeen says. “The mission of Jesus has to be the filter through which we choose everything we do. When you start seeing people saying yes to Christ and inviting their friends and family, you see a healthy stream of unchurched or unbelieving people coming to church.”

As Riverside transformed into a church of grace that celebrates people accepting Christ, God began to “entrust us a little bit more with people and resources,” Lundeen says.

It’s impossible to miss the church’s reliance on God and its ability to ask for help.

“We’ve all had to be good learners,” Machmer says. “We’re constantly asking for help, looking for ideas and churches we can learn from.”

Lundeen says he’s had to move from generalist to specialist and include people who are better than he is in certain areas.

“I need people I work with to be gifted, and I can’t be intimidated by that,” he says. “I’ve got to welcome that kind of strength and giftedness. It’s important to remember whose church it is—and it isn’t mine. It’s Jesus’ church and I’m just the interim pastor. It may not be my official title, but we’re all interim pastors.”