Home Ideas In It Together: Hope City Church 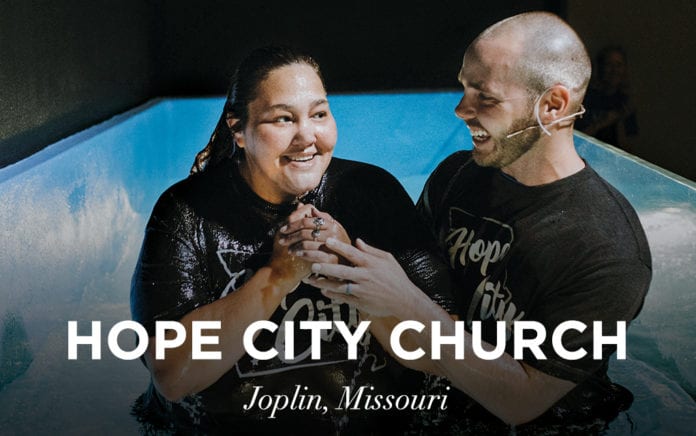 Hope City Church in Joplin, Missouri, arose out of catastrophe.

Pastor Cody Walker planted Hope City just three years after much of Joplin was flattened by an EF5 tornado—the costliest tornado in U.S. history and the deadliest since 1947.

“Along with more than 160 people dying, homes, jobs and businesses were completely gone overnight,” Walker says. “This began a complete makeover of an entire region. Hope City was birthed as a declaration that God is in the business of bringing hope to the worst situations.”

In the midst of so much loss, Hope City Church has flourished alongside its community. While many people left to start new lives elsewhere, others moved in. The city’s hospital and high school, destroyed in the tornado, were rebuilt as state-of-the-art facilities. What was once a career pit stop for some has become a permanent home, Walker says, where many people have chosen to invest themselves long-term.

Hope City has grown rapidly in that short time, from 300 to around 1,300 in just four years. Walker credits God first and foremost.

“There are so many things where God has just placed his favor,” he says. “Sometimes God just breathes into stuff. I think for us, a big thing has just been going, OK God, we’re going to step out in faith and pray like crazy that we’re able to stay in step with you. The scary part of fast growth is continuing to grow without getting too far out in front of God.”

But Walker does point to two things he thinks Hope City has done to fulfill its vision of reaching the unchurched and creating easy on-ramps for them into the body of Christ.

From Outreach Magazine  Come As You Are: Faith Promise Church

First, they use the phrase “We’re all in the same boat” a lot, referring to The Message’s translation of Romans 3:9–20, “For all have sinned and fall short of the glory of God.” It’s comforting to people who’ve never stepped into a church before. Walker says it has caught traction in conversations with visitors time and time again.

That’s true of Shawn Giddens, who attended for the first time with his wife when the church launched. Initially he had no interest in becoming a believer, but from their first visit, he says, he’d never felt more welcomed in a church before. Before long, he convinced his parents and some extended family to attend, and then he and several of his family members were baptized.

“One of the things I think Hope City has done well is that they strongly communicate that no one here has it all figured out,” Giddens says. “Oftentimes, I think the thing that keeps people out of church is that they feel like they’re going to be judged in this room full of perfect people, or people who think they’re perfect. But Hope City has been very adamant about teaching that we’re all in this thing together. They share testimonies of people from within the church either on stage or on video, and whenever you see a video of a guy or a girl you just said hi to in the lobby, it’s just a different level of connection.”

The church also uses serving as one of its primary tools to engage newcomers.

“We’ve elevated engagement in the church (rather than just attendance) by making serving a first step in getting connected,” Walker says. “We believe that no matter where you are on your spiritual journey, you can find community through serving. This has not only elevated the buy-in factor, but also has allowed folks to begin a discipleship journey through a pathway of serving.”

From Outreach Magazine  6 Easy Ways to Motivate Your Team

Walker says he thinks this is appealing to people joining the church (including lots of 20-somethings, young families and empty nesters) because the culture in Joplin is one where people are eager to respond to need and more interested in action over empty talk.

“In our community, the tornado woke that desire to be mobilized in your faith,” he says.

Out of death, God breathes life and hope.