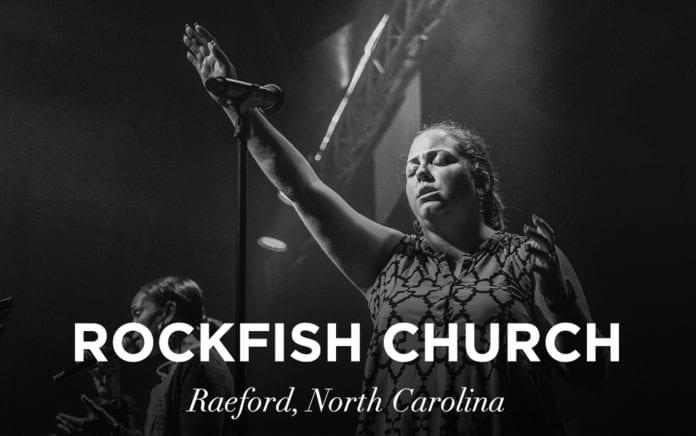 RockFish Church’s Welcoming Culture Is Worth the Intentional Effort

When Kristina McClellan began attending RockFish Church with her boyfriend and their kids in 2012, she had no intention of becoming a Christian or seeking God. They were just looking for a place for their little ones to hang out with “good kids.” RockFish, a church just outside Fayetteville, North Carolina, looked welcoming and was close to their house, so they decided to give it a try. From the first sermon, though, they knew they’d stumbled upon something special.

“I had never heard a pastor speak like this one did,” McClellan recalls of Senior Pastor Tony McVickers. “He made a relationship with God seem real and attainable, even for someone like me.”

“I was an extremely broken and shame-covered person,” she says. “It was easy to see I was more than rough around the edges. For the first eight months, I’d go into RockFish either hung over or at least reeking of alcohol. It was unbelievable how much love and Jesus I felt there. Even though it’s a big church, there is a huge community of love, acceptance, grace and wisdom. I was really lost, and the church was genuinely trying to help me find my way. I didn’t feel judged or unwanted, just loved right where I was.”

Today, McClellan and her family not only continue to attend (they became members in 2014 after she and her boyfriend married), but they are unashamed disciples of Christ transformed in his power. What they experienced was something McVickers says is common among people who visit RockFish and decide to make it their church home: an encounter with God.

“We have an encounter culture,” McVickers says. “We allow God to be God. We take down things that box him in. I’m not trying to sound kooky, but when you come in you experience God. People will be standing in worship, and they’ll start crying. It’s not emotionalism; we’re not doing anything. We do expository teaching on Wednesdays and couple that with weekend life-application teaching. As people align with the Word, God changes their lives. As life change occurs, people get excited.”

From Outreach Magazine  3 Ways to Share Tech With Seniors

That’s part of what has helped RockFish experience such rapid growth. But it goes on from there. When people get excited about their own lives changing, McVickers says, they want others to experience it too. In addition to having an encounter culture, he says they also have an invitation culture.

“Every month we give out business cards people can keep in their wallets,” McVickers says. “We encounter people who are hurting all the time. It’s as simple as showing people you care and offering them a resource. So if we put [this tool] in their hands, and we promote what is already an invitation culture that results from life change, then people who are excited about Jesus talk about Jesus. When you make it easy for them to invite people to church, they do it. It’s happening, and it seems to have an exponential return in growth.”

McVickers says the church leadership is intentional about creating a welcoming space for guests. For example, he makes it a point to dress in casual clothes when he preaches and avoids using lots of religious lingo. They put fun, yellow umbrellas outside. They don’t have pews. They put cup holders on the chair backs. They show a genuine appreciation for men in a culture that can be less than friendly to them. These small details make a big impact.

Because RockFish is located near Fort Bragg, about 80 percent of the church body is either in the military of affiliated with it. But McVickers says they’re a church of military, not for military. Military members are treated just like anyone else, because that’s what their military-affiliated members want.

From Outreach Magazine  What Paint Cans Do You Need to Move?

“We are doing life together, so there’s no ‘us’ versus ‘them.’ I’ve been to a lot of towns where the military is seen that way. That can lead to some disdain, but Christianity is the antidote to that. Rank is left at the door.”