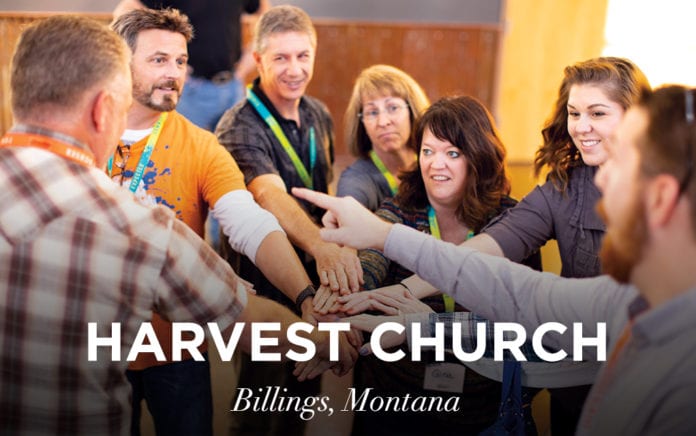 After adding multiple campuses, the leadership at Harvest Church in Billings, Montana, made an unexpected move: They decided to simplify.

“We actually are no longer a multisite church,” says Executive Pastor Crull Chambless. “We were very complex in our ministry, but now we focus on our core local target audience.”

This simplification has led to growth and made it easy to clarify next steps for churchgoers or even one-time visitors, according to Chambless, who has been on staff for nearly a decade. Rather than “large megachurch procedures,” as he calls them, the staff can better challenge people to join a small group and, from there, become a volunteer or serve in some capacity.

Chambless also attributes growth at Harvest, founded in 2000, to the leadership making a concerted effort to examine the spiritual and emotional health of the staff and congregation. Moreover, ensuring that the church uses outreach methods that are effective and efficient has led to deeper levels of engagement all around. But getting the people of Billings to open up isn’t always easy.

Due to its geography, Billings is a unique city, with a sandstone formation known as the Rimrocks hovering above the rest of the town in the valley below. The rugged landscape has long required residents to be self-reliant to survive, but the individualism has its downsides, too.

“In Billings, we’re ranchers and farmers, and there’s this sense of, ‘I’m fine. I don’t need anybody’s help,’” Chambless says. “There’s relational isolation. If someone has an emotional problem, they think they just need to pull up their bootstraps and deal with it on their own.”

From Outreach Magazine  How to Grow Your Wisdom

But Billings’ high rates of suicide and alcoholism, which have garnered headlines recently, make it clear that the residents do need support. In 2018, the Billings Clinic announced the state’s first medical residency for psychiatrists, anticipated to expand access to care to a region desperately in need of more mental health providers.

Harvest Church is working to better serve the psychological needs of the community by piloting a mental health program developed by Christian psychologists and self-help authors Henry Cloud and John Townsend.

“We organize around being individually relational,” Chambless says. “I think this is one of the few things contributing to our growth—we’re a highly relational church. But we’re not trying to grow the church and be big. The goal is to help people take a next step in their walk with Christ.”

Chambless points out, for example, that Harvest has a team of volunteers who simply hang out in the lobby on weekends and introduce themselves to churchgoers. They want to be able to have meaningful enough conversations with newcomers to truly connect with them. In one case, a member of the team invited a visitor to coffee, then to a men’s retreat the church hosted. The man accepted the invitation and ended up giving his life to Christ.

“Three weeks later, he got baptized and his daughter got baptized,” Chambless says. “Now, he’s in a small group learning to read the Bible and pray.”

The man’s small group leader knows to connect with him on a regular basis and eventually challenge him to serve, Chambless explains, noting that when people serve, they know they have a job to do and attend services more frequently and enthusiastically.

From Outreach Magazine  How to Use Hashtags

Church member Adam Gross says Harvest’s relational approach has been life changing for him. In 2010, he visited the church as a single man, but today is married and a father after beginning a romance with his now wife at Harvest. He has served in multiple roles at the church, including as one of the volunteers who connects with newcomers in the lobby. This has allowed him to hear the stories of others and, in turn, let them know that their stories matter.

“You’re able to have a community of people you get to know as family. That’s the personality at Harvest,” Gross says. “It’s very, very accepting. I felt so comfortable from even my first time there; it was an easy fit. We’re just a mixed bag of people, but we all love each other.”