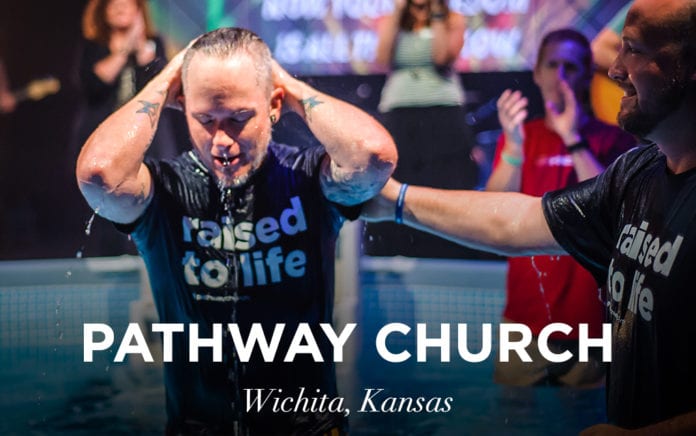 According to Todd Carter, lead pastor of Pathway Church in Wichita, Kansas, every church has a life cycle. Since Pathway had been around for 60 years, it was time to breathe new life into it.

“We changed our language in the service, we changed the order of the service and we changed some cosmetic items to create an atmosphere that’s more friendly to an outside person,” says Carter. They even changed the church’s name from Westlink Christian Church because they wanted a more generic name that would travel to more communities.

“We also hoped the name change would reignite our mission to engage the whole church,” says Carter, noting that relational evangelism is all about growing hearts and minds in order to reach those who don’t know Christ.

In 2018 Pathway launched a strong invite initiative across the church, preaching and teaching what the Bible says about having a heart for invitation. Carter insists that nothing they implemented was revolutionary—they simply discussed the importance of invitation, always sharing an “invite” story at the close of each service, and distributing invite cards each Sunday. In addition, Carter weaves stories of invitation and life transformation into his sermons. Staff also is held accountable for leading the way with invitations.

“When you get the staff leading out in that way, it bleeds into the congregation and keeps people focused and moving in the right direction,” says Carter. “Cultural change takes time, but this invite initiative broke the inertia.”

Not only that, but it also jump-started the pastor’s personal outreach because it mobilized Carter out in the community, enabling him to regularly speak with schools, chambers of commerce and businesses.

“When you’re deeply involved in church work, you can get separated from your mission,” says Carter. “This has helped grow me and the whole church.”

The storytelling aspect of the invitations is a powerful way to demonstrate God’s will at work. For instance, recently a story was shared about a man who had a son on a sports team and how the man was invited to church multiple times by another father. Each time the man was resistant to the invitation. One day, the man accepted the offer and attended a service. Ultimately, their family got connected with the congregation and now come regularly.

“At VBS, it was so exciting to see his kids out there singing and praising God,” says Carter. “That’s the value of the invitation.”

The church makes sure to tell a variety of stories from all sides of every demographic. For instance, a student invited a peer to a Bible study. Though that boy, too, was reluctant initially, finally he showed up one Sunday.

The stories abound. Dennis Cloud was looking for a church home but didn’t know where to start when he received an invitation from church member Chris Roy, whom Cloud didn’t even know.

“Chris taking a step [to invite me to church]—I’d never known anyone to do that,” says Cloud, who began coming with his family. Before long, he was the one offering invites to others.

“God tells me to whisper in their ear, then they come,” insists Cloud. “It wasn’t me—God did that.”

As Pathway has refocused its mission, the message hasn’t changed, only the practice.

From Outreach Magazine  Gaining an Outside Perspective

“When you change the practice of how you accomplish the mission, however, people tend to get really uncomfortable,” explains Carter. “I’ve heard it phrased, ‘I didn’t leave the church. The church left me.’”

It’s painful for staff and lay people to watch longtime friends leave the church, but Carter believes that when you’re close to the mission, you are close to the people who are new believers.

“As you put yourself in close proximity to those lives that are being transformed and growing in their faith, everything becomes clear,” says Carter. “That helps you move forward to know that this is the heart of Christ and this is where he wants you to go.”