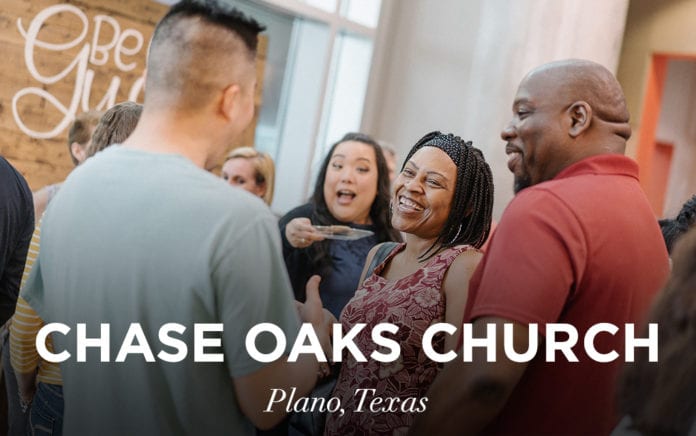 There’s a good chance that if Chase Oaks Church, in Plano, Texas, ceased to exist tomorrow, its community would not only notice, they would be devastated. That’s because Chase Oaks has built a reputation as a community partner, lovingly serving where many people wouldn’t expect a church to show up.

“We are a very grace-first, love-first, come-as-you-are culture,” says Senior Pastor Jeff Jones. “We partner with anybody we have common ground with, whether they agree with us or not, to serve in the community. That’s increased our reputation as an open group of people.”

Some of those partnerships have been unexpected or surprising for a church, he says. For example, they’ve brought to Plano the Bail Project, which pays bail for people who can’t afford it. They partner with LGBT organizations to care for those with HIV and AIDS. They worked with the city to help form a citywide antidiscrimination policy. And as a church, they welcome LGBT people, although they maintain and teach a conservative, traditional view of marriage and sexuality.

“I think in some cultures and in some areas, that may not be a big deal, but in Texas it’s rare that we’re open,” he says. “People in our community know we’re a welcoming place [for LGBT], where you can serve and be in groups.”

In another partnership, they started a poverty initiative to help difficult-to-employ people find jobs, working with the district attorney and more than 50 local employers. People they’ve helped include felony offenders and single moms.

“We were tired of dealing with symptoms of poverty, like feeding and clothing people,” Jones says. “We still do all that stuff, but we’re trying to get at the root of it to say, ‘How can we work with area businesses big and small to solve it at the job level to help people be employable and help them earn a living wage?’”

From Outreach Magazine  “The Music Was Explosive, Exciting and Entertaining”—Lessons From a Mystery Visit

Part of the church’s DNA is that they don’t do anything alone. “We partner with like-minded people to serve in areas where we have common ground,” he says. “You reach not only the people you’re serving, but also the people who share that same heartbeat. Over the years, that’s become our reputation: We put our money where our mouth is.”

If there’s a problem in the community, the city often goes to the church for help solving it. “Years ago we got stiff-armed a little bit when we first started trying to engage the community,” Jones says, “so it’s great to be at a whole other place of trust.”

Mark Haun has been a Chase Oaker for 25 years, and he’s witnessed the church go from inwardly to outwardly focused, and the growth that has resulted.

“In a lot of conservative Christian environments, churches seem to find the things they disagree with that the government has done,” Haun says. “But one of our DNA statements is we boycott boycotts. We’re not going to take a stand on what we’re against. I’d rather spend my energy lighting one candle than spend it cursing the darkness. People say they’re OK with Jesus, that it’s the church they’re not sure about. We’re trying to change that.”

The church has a large and diverse population of unchurched people to reach. Plano is mostly unchurched, and the largest ethnic minority is Asian, followed by Hispanic and African American. And the church reflects that diversity, offering services in Spanish, maintaining a Chinese student ministry, and partnering with schools in East Plano’s immigrant community to offer ESL and citizenship classes.

“We’re intentional about it,” Jones says of reflecting the community’s ethnic diversity. “We stage toward it, we hire toward it, bring on leaders with that in mind. It’s a value of ours that really changes the way church feels and operates.”

From Outreach Magazine  Every Church a Sending Church: Point Church

That’s why when a visitor comes to Chase Oaks, they see people from all walks of life—including those who look, talk or act a little bit differently.

“There’s that grace-truth tension,” Jones says. “Jesus came full of grace, full of truth. But I think what we see Jesus doing is always leading with grace, which opens people to truth. But you don’t lead with it. So in a community surrounded by a lot of truth-first approaches, it makes us a little unique.”