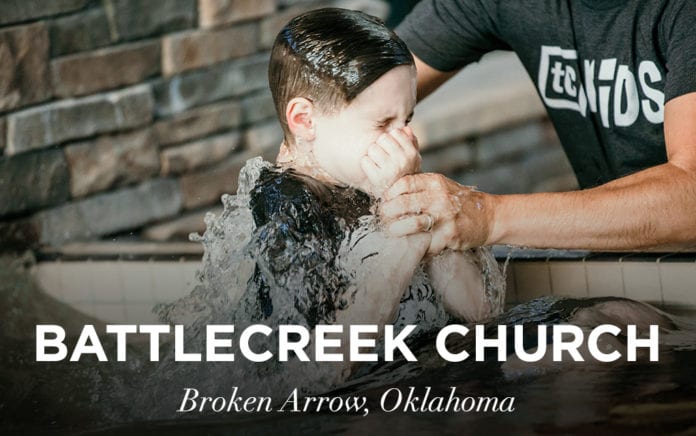 Ministering to Youth Is Foundational for Oklahoma Church

When Alex Himaya was approached by the staff of Gracemont, a dying church in Tulsa, Oklahoma, to take over as its lead pastor it wasn’t exactly the dream call every pastor hopes to receive. The church was saddled with a bad reputation, millions of dollars of debt and only 120 people—including the babies.

“It felt like an invitation to board the Titanic after it had hit the iceberg,” says Himaya, who initially declined the offer. Six months later, however, he couldn’t shake the nagging feeling that God wanted him at Gracemont. So in March 2003, he moved to Oklahoma to share his vision of a new church. By June they had dissolved the former church, and in August they launched The Church at BattleCreek, now known as BattleCreek Church, with a core group of believers.

Over the past 16 years, BattleCreek Church has grown and morphed. It now has six campuses located in every major area of Tulsa, plus campuses in Cairo, Egypt, and Amman, Jordan—both of which are growing in number. Last year in Egypt, for example, 3,000 people accepted Christ.

“There is a manifest presence of God in what we’re doing,” says Himaya. “We’re not cooler, hipper, more talented or more technologically advanced than another church, but what we offer is God showing up. The presence of God changes everything.”

To aid in that mission, BattleCreek Church is focused on ministering to the next generation.

That’s why reaching families with children is a big priority. The church hosts an event called TUL Night (TUL is the IATA airport code for Tulsa) that Himaya originally conceived of 25 years ago when he was a youth pastor. TUL Night is a citywide youth ministry that is held periodically throughout the year to enable area youth from small churches to congregate and socialize. Youth pastors usually bring a handful of kids who invite friends, and those friends invite friends.

“All of a sudden these youth groups have new life,” explains Himaya. “Plus, churches then have the potential to reach these children’s families. It’s kingdom work.”

That’s just one piece of the next generation movement. According to Himaya, in the last several years hundreds of children have been adopted, fostered or provided respite care by families in the church.

“Our elementary and preschool ministries look like the United Nations because we have kids from all over the world, from every walk of life,” says Himaya. “It’s really beautiful but in some ways very messy because these kids come from hard places.”

Himaya describes Tulsa as a big small city with a million people in the metropolitan area.

“Even though we’re in the Bible Belt, I would guess that on Easter Sunday 800,000 people in this area do not have a church,” says Himaya. “There are those with some religious background who perhaps attended church as a kid. But hundreds of thousands of people need the Lord.”

Helping those people connect with the right church home can be a challenge all its own. When Himaya was a youth pastor, he noticed that whenever a family chose to leave the church the lead pastor would take it really hard. At the time, Himaya didn’t see why his friend took the loss so personally.

“I thought, Who cares? There are plenty of other people to reach,” recalls Himaya. Now that he’s a seasoned pastor himself, however, he understands that nagging sense of loss, but recognizes that life is not about building his niche of ministry, but rather giving all glory to God.

“When we point the attention to Jesus rather than ourselves, we experience a lot more joy,” he says, noting that doing so can be difficult in the realm of social media. “We aren’t wired by God to promote ourselves. There are likes and shares and notoriety and accomplishments and maybe even progress, but it’s empty in terms of joy. The real joy comes when we make much of what the Lord is doing.”