Home Ideas Showing Up and Helping Out: Greenford Christian Church 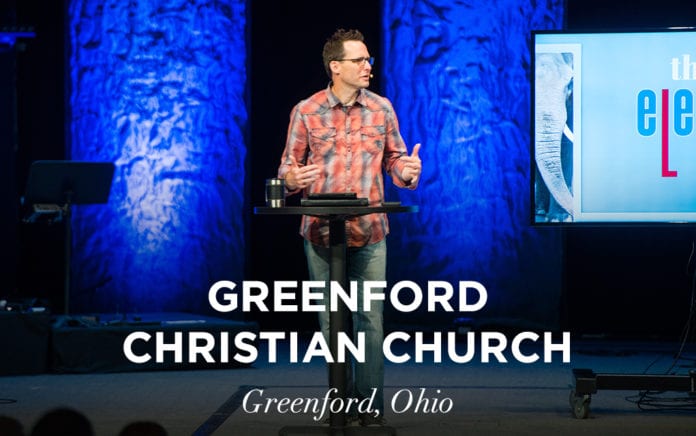 Relationships Are Key at Greenford Christian

Being located in what could be described as the middle of nowhere means that the people who choose to attend Greenford Christian Church truly want to be there and are willing to drive a good distance to be a part of this special community.

“I’m not joking when I say that our town has just a couple of stop signs,” says Sean Kelly, lead minister at Greenford Christian, a 187-year-old church in Greenford, Ohio. “The only traffic jam that happens is on Sunday morning.”

Never have congested roads been more beautiful, because it’s the direct result of the phenomenal discipleship that takes place among the people of Greenford Christian.

“Gone are the days when the church is doing the heavy lifting when it comes to discipleship,” says Kelly. “We empower our members to actively invite others to Christ. And they do that by inserting themselves into the community every chance they get.”

They call it the “out component” of evangelism, because they are out in the community with no strings attached, always eager to build relationships with police officers, firefighters, school superintendents and businessmen and -women. For instance, members of Greenford Christian recently offered to paint all of the fire hydrants in the town just adjacent to their property.

“The city manager said it would have taken a month for them to do what we did in two-and-a-half hours, but we were happy to do it. We want to be a positive presence in our community,” says Kelly. “It’s simple, relational stuff. That’s discipleship at its absolute best.”

From Outreach Magazine  Building on a Strong Foundation

When it comes to leading others to Jesus, Kelly maintains that it all goes back to the four Ts: time, talent, treasure and testimony.

“Everybody has a story to demonstrate how God has impacted their life to be used to impact others,” says Kelly. But taking the time to share that story is usually the one thing that gets lost in the shuffle.

“Time is our most valuable commodity. Ask yourself, ‘Do I leverage my dining room table [by inviting people to come sit around it]?’ because time is the most impactful weapon in our arsenal when it comes to building relationships with people,” he says, noting that the key is to meet people where they are.

“That’s where the church has often missed it,” says Kelly. “We need to give folks a lot of grace and patience, even though at times it’s going to be messy. We have to embrace people in their brokenness and still challenge them to take steps if they don’t want to stay where they are.”

But we all know that a relationship void of trust is empty.

“We didn’t marry our spouse the day we met them. Trust had to be established,” says Kelly. “The same holds true in the church.”

That’s one reason the people of Greenford Christian regularly show up and help out. For instance, every month the church provides 1,000 to 1,500 families with food and clothing. They also participate in the Food For Thought backpack program that benefits six area schools, which involves loading up backpacks with food every Friday for students who need it. In addition, the church gives away 25 percent of its budget to missions because members care so deeply for people.

From Outreach Magazine  Is Your Church Emergency Ready?

“If we were in a city of a million people, we’d probably be running 20,000 people, but we’re impacting where we can and we love that,” says Kelly. Given the church’s growth, plans are underway to launch another campus sometime next year about 20 minutes away in a more populated area.

“Spiritual leadership is a long game, not a sprint,” says Kelly. “I’ve been here 17 years and in a lead role for 10. We’re just now starting to see significant fruit that we laid in place a decade ago.”