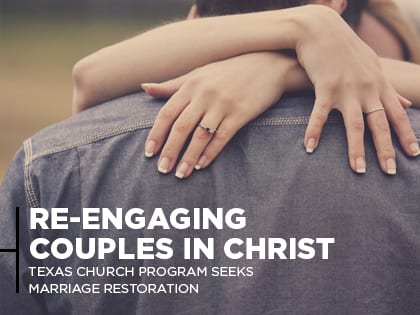 Watermark Community Church’s marriage enrichment program is offered at more than 100 churches across the country.

When Susan Cox stepped inside Watermark Community Church in Dallas, Texas, she pulled a hat down over her teary eyes and kept her gaze straight at the floor.

She’d had an affair and her marriage was in crisis, so to appease her husband, she agreed to attend the church’s marriage enrichment program, called re|engage. She showed up but refused to wear a nametag.

Cox was not alone in her trepidation. Many couples who participate in re|engage report that they initially feel awkward, ashamed, angry, embarrassed and nervous. After completing the program, however, these same folks emerge with a renewed sense of hope and encouragement, love and commitment, peace and gratitude.

“Now our marriage is characterized by grace, understanding, thankfulness and joy,” says one of the participants.

“At the end of the day, re|engage is not about marriage, it’s about discipleship,” explains McGee. “To be a good disciple, you must have a good marriage.”

Since it began seven years ago, re|engage has helped couples examine God’s design for marriage and apply biblical principles to their relationship. It’s a 16-week experience, and each week includes a time of music, prayer, a teaching or testimony, and small-group sharing that follows a specified curriculum. The ongoing, open program is offered all year, which means that couples do not need to register beforehand and can start the process at any point. Childcare is offered for infants through fifth grade.

Watermark Church, where average weekend attendance is 14,000 across three campuses, chose to offer re|engage because church leaders wanted to find a way to address the community’s spiritual and relational needs. Marriage enrichment seemed like an ideal fit when they saw couples both inside and outside of the congregation struggling in their marriages. Some unions were on the verge of dissolution; others were simply in need of a reboot. Instead of filtering every couple through one person (in many churches, that person is the pastor), Watermark continually trains hundreds of competent, compassionate lay leaders who are eager to use their gifts to help hurting individuals.

“We do ministry through people, not to people,” says McGee. “Our laypeople equip, inspire and strengthen marriages by acting as shepherds in the process of healing.”

Marriages grow weak for many reasons, including extramarital affairs, financial troubles, health problems, differences in childrearing and hearts that grow cold and distant. The glue that holds marriages together, however, is solid communication, so that’s what the ministry focuses on a great deal. In addition, the re|engage program holds tight to two vital characteristics: authenticity and grace.

“Participants may feel like they’ve blown it, but they still feel welcome here,” says McGee. “At the same time, there’s a high call to truth.”

Being forthright hastens healing. When participants first start re|engage, nobody knows the depths at which everyone is struggling. But as couples break into small groups and begin sharing their truths, by the end of the 16 weeks, true friendships have developed.

“That’s a marker for health, seeing couples continue to meet beyond the program,” notes McGee. “When people really know you, they can challenge you, encourage you, root for you and pray for you.”

Susan Cox, the woman who didn’t want to make eye contact when she first attended re|engage, was one of many whose hearts were transformed as she learned to base her life on Scripture. Ultimately, Cox and her husband reconciled. But God’s work didn’t stop there. Today Cox serves as a director for the re|engage program, and she is thrilled to see the work Christ has done not only in her own marriage but also in the lives of so many others as a result of this ministry.

From Outreach Magazine  5 Ways to Connect With Unchurched People

Today, re|engage is offered at more than 100 churches across the country. At Watermark alone, each of the last two years saw 1,000 couples participate in re|engage. McGee estimates that number will grow this year, but the relationship transformations he has already witnessed are too numerous to count. He’s seen couples come to re|engage with divorce papers in hand, but leave holding hands with a renewed love, respect and commitment—not just for each other, but also for Christ.

As one participant stated, “Christ changed our marriage by changing my heart and leading me back to him and to my wife.”

McGee remarks that people liken this program to a dimmer switch. “Participants see the light and slowly brighten over time,” he says.