Home Ideas Church Profiles Something for Everyone: Grace Church 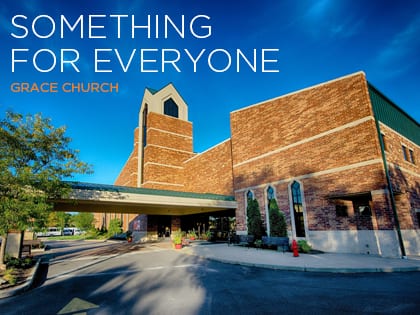 Grace Church in Ohio Makes It Easy to Connect

Bobbi Kovalik began using cocaine as “weekend fun” with friends, and it turned into a year of addiction with daily use. She was working two jobs to support her habit and became close with a co-worker who attended Grace Church in Middleburg Heights, Ohio. Having virtually no church background, she accepted an invitation and at her first service found herself on her knees crying while feeling “surrounded by a presence” she now says was the Holy Spirit. The years following were a rollercoaster of church involvement, drug use and alcohol abuse, but today she has been clean for four years and gives the credit to Christ and the people of Grace.

Kovalik’s story indicates not only the heart of Grace Church, but its pattern of growth, which Senior Pastor Jonathan Schaeffer describes as “sure and steady” through a commitment to “communicating the compassion and forgiveness of Jesus through every means possible.”

The list of Grace’s outreaches, groups and Bible studies is massive and a large part of the steady growth comes from what Schaeffer refers to as “side-door” entryways into the church community. Fifteen years ago they began a support group for those going through a divorce, which became the launching point for today’s groups that include post-abortion support, widows’ fellowship, job seekers, a same-sex attracted group and dozens of others.

They have multiple volleyball and softball teams, a meals ministry, a service for the deaf and native language Bible studies for several groups. On top of all this, they offer more than 40 topical or felt-need adult education classes that meet every Sunday and have regular spiritual retreats and overseas mission trips. If ever “something for everyone” was true, it seems to be so at Grace.

“We’ve found that if people can get connected to a group and build relationships, they are more likely at some point to put their trust in Christ,” Schaeffer says.

In addition to regular small groups and studies, Grace regularly hosts “one-and-done” large group events like guest speakers, comedy nights or “Go Deep With the Browns” where a few players from the Cleveland Browns attend a tailgating party and then field questions from the audience. The players then present their testimonies and invite attendees to come to know Christ.

Alongside finding every means possible to share the message of Jesus, the people at Grace Church are determined to take risks without fear and be sacrificial and kingdom-centered. They give away 25 percent of their income to other ministries both nationally and abroad and have planted five new churches in the last 15 years that are described as “sapling” churches—independent churches that are not considered extensions of Grace.

When most churches are planting satellites that feed back into a primary campus, Grace is asking their people to leave the comforts of home and launch something new and autonomous, taking their money and manpower with them. In March of this year they encouraged and released 200 people who were regular attendees, volunteers and givers and asked them to invest in the latest plant.

Yet, even as they give away people and resources, the church grows, and growth brings its share of challenges. “My wife and I have five kids and the vehicle that used to fit the whole family no longer does,” Schaeffer says. “The challenge is similar.”

Grace has partnered with local businesses to use their parking lots, and eight shuttles run every Sunday for the overflow of 250 cars. At times church growth has outpaced hiring staff, so Schaeffer and his team are careful to keep their focus on a “vibrant relationship with Jesus,” investing the time and discipline necessary for personal growth through devotional time, sabbaticals and retreats.

“In our day we face increasing brokenness in society and it’s easy to become either cynical or burnt out,” Schaeffer says. “You can’t be all-hands-on-deck forever and we can’t sacrifice our relationship with Jesus and the power of the Holy Spirit, even in the name of ministry investment.”