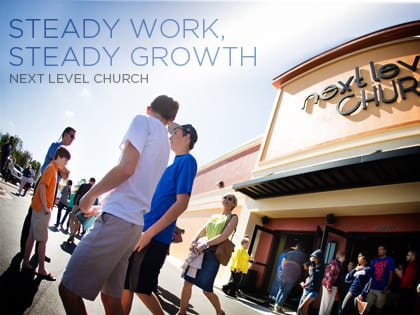 Tiffany Mullins resolved that her daughter would grow up in a two-parent home, —differently than she did. But when the Florida woman divorced in 2009, she hit her rock bottom and arose with a shaky self-worth.

Mullins then entered a bad relationship—but also stepped inside Next Level Church. Her counselor there helped her begin to view herself as “a daughter of the King,” and changes followed. The talented singer helped lead worship, and later became an associate children’s director. “I just can’t believe that the Lord has brought me here,” Mullins says.

Next Level leaders create a place that people love, so that attendees, such as Mullins, experience a loving God. For four years in a row, the Fort Myers church ranked among the nation’s 100 fastest-growing churches, according to Lifeway Research.

Consistently doing small things well makes the biggest difference, according to Lead Pastor Matt Keller. “We are unrelenting,” he says. Keller believes that some visitors walk in, giving God one last shot. Next Level makes it difficult for those attendees to turn him down.

After all, they may hear songs in their native language. Church leaders, including Keller—“just a tall white guy raised in the Midwest”—aimed for diversity, and hit bull’s-eye. Keller cites that intention toward diversity as another growth factor. About 35 percent of attendees are non-white—being Hispanic, African-American or Asian, according to Keller.

From Outreach Magazine  "I Expected More" - Lessons From a Mystery Visit

“You don’t understand what that means to me,” he reports attendees saying after that worship set. “We want to be a church that looks like our city,” Keller says.

If Next Level is to seriously represent the area, they’d be remiss—especially with Keller’s training in business—to overlook the corporate world.

People consider Fort Myers home to “the newlyweds and the nearly deads,” according to Keller. He knows otherwise. Successful businesses and company headquarters such as Hertz call southwest Florida home. Some entrepreneurs also call Next Level their church home, thanks to the church’s leadership conference, called Advance One Day, “a huge outreach opportunity,” according to Keller.

It’s not a church service, or overtly spiritual. Last year, the event drew 1,000 business leaders who learned leadership principles and how to grow their organizations. Most in the crowd were “completely unchurched,” Keller says. “And they pay to be there … it has created conversation.”

And should that conversation turn personal, Keller’s own story about Next Level’s growth gives credibility. “We like to say we’re an overnight success—10 years in the making,” Keller says.

The 2002 church plant did not double as expected when they relocated to a roomy high school after their movie theater meetings. Church leaders saw “slow and steady” growth instead. But they fought discouragement by focusing on Next Level’s own path, not numbers at other churches.

They continued to do the small things excellently and, in 2012, they bought and renovated a church building. That’s when they doubled.

But even before Next Level could make that list, the Kellers prioritized faithfulness. “God,” they’d pray, “find us trustworthy with what you have given us so you can trust us with more.”