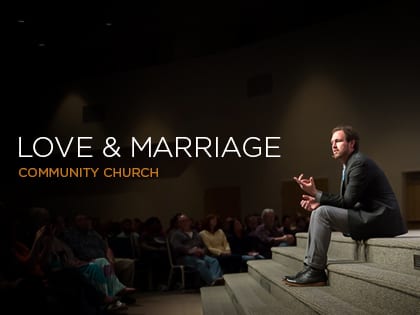 Community Church: “When We Say We Love People, We Really Mean It”

When people say things like, “My husband is cheating on me,” the Lowdens of Virginia share hope—and their own experience.

“They can’t believe that my wife stayed with me,” Bill Lowden says. “I had hurt my wife very deeply, and we weren’t sure we were going to make it.” But the couple celebrated their 19th wedding anniversary in August, renewing their vows after stepping unknowingly into a church that had declared war on divorce.

Lowden, a lifelong church attendee, says he felt something different—the Holy Spirit—when he visited Community Church. That’s where he heard about Cleansing Stream retreats, a revival weekend where he received Christ’s forgiveness. “For the first time in my life, I know who God is now, and I know how loving he is,” he says.

Even pastors from other churches send struggling couples to Community Church. Marriage counseling is free there for those unable to pay, and then some people, such as the Lowdens, learn to mentor others facing divorce. “I grew up with divorced parents,” says Community Church Lead Pastor Michael Brueseke. “I don’t want kids to grow up that way.”

“People shy away from it because, from the church’s perspective, it’s dangerous,” he says. “You don’t want to offend people.”

People at Community Church want to love. They want even fresh-out-of-prison attendees to feel affection, no strings attached. Abundant life is at stake.

“When we say we love people, we really mean it,” says Brueseke.

It’s one reason the Chesapeake church grew, according to the pastor. “The life where you’re really alive … only comes from Jesus,” Brueseke says.

At one time, his friends and co-workers felt more excited to sit on a bar stool than in a church pew. It bothered him. “Oh man,” he says, “there is so much more.”

Church leaders hold a “creative meeting” twice a month to discuss ways—anything short of sinning— to bring people to Jesus. Their typical number of first-time guests nearly doubled with the “bring a friend, get a T-shirt” initiative. Invitees and their guests now sport red, “Love God, Love People,” shirts—and Community Church has more to love.

We really just love people right where they’re at with no expectation that they’ll act a certain way,” Brueseke says. “Because God loves you, we love you.”