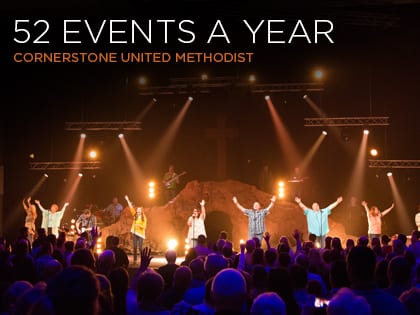 Cornerstone United Methodist Is Keeping It Simple; Focusing on Worship

Several years ago, Brad Kalajainen, lead pastor of Cornerstone United Methodist, attended a conference in hopes of learning some tricks of the trade for growing church membership. At one point, he asked a minister who had successfully launched a large church if he grew that church through a series of big events. “I thought that maybe he had brought in some big names or something to garner community interest,” says Kalajainen. The other pastor nodded his head. “Yes,” he replied with a smile. “We have 52 big events a year.”

Suddenly it clicked that there was no such thing as a magic formula for expanding churches. In fact, it was really quite simple. “When you focus on your worship, people want to come. And when your congregation is confident in extending invitations, numbers climb,” says Kalajainen. “So that’s what I’ve been doing ever since—focusing on those 52 big events a year.”

Cornerstone United Methodist, located in Caledonia, Mich., was a church plant. After taking root, the church has seen steady progress over the past 25 years because they understand their community’s needs. Being located in suburbia, the church deals with broken marriages, child rearing issues and rural agriculture problems, so their new family ministry addresses such matters. “If we were in the middle of downtown Detroit, we’d be facing a different set of issues,” says Kalajainen.

Their “Glocal Transformation” initiative involves both global and local community ministries. On the local side, Cornerstone has partnered with a low-income inner city Grand Rapids elementary school to buy new winter coats, boots and mittens for 200 of their students. The church also provides after-school tutoring and a free full-scale, Jesus-centered, week-long summer kids camp that is run like a VBS with sports, arts and activities. On average, 450 children attend every summer.

Globally, Cornerstone’s mission team goes to northern Kenya for two weeks every summer to engage in hut-to-hut evangelism work in remote areas. The ministry includes distributing solar-powered audio Bibles in their native languages, conducting veterinary clinics and drilling wells to provide clean water to the Rendille and Gabbra people. “Because we go every year, we’re developing long-term relationships with the Kenyans,” says Kalajainen. “Our congregation gets excited about tracking progress and witnessing transformation. God is creating a thirst for his Word in these villages.”

In 2010, the 25-year-old church relocated during the heart of the recession, and despite hard economic times, they made a leap of faith and erected a $13.5 million dollar project because they felt God saying, “Move now.”

They built on a 40-acre site at a time when Michigan led the country in unemployment, but that leap ultimately paid off when they gained 800 to 1,000 members after relocating.

Why the jump in numbers?

“When you have a facility and a relevant ministry that’s outreached focused, you have a combination that works,” says Kalajainen.

Moving into multisite ministry has also ensured growth into the future. They opened their third campus in October 2015 and are looking to add one every other year. The church has created a process for developing lay people for multisite ministry, utilizing campus pastors that come from within. “We have the bullpen of church planting leaders warming up,” explains Kalajainen, who says they train lay people for 15 consecutive weeks in a launch academy.

The focus, however, will always remain on those 52 big events a year.

From Outreach Magazine  5 Destructive Things We Say to Ourselves