Home Ideas Church Profiles All in the Family: Family Church 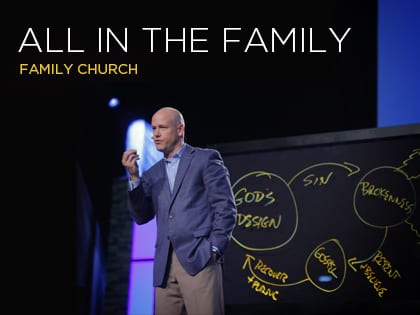 Family Church Makes Diversity a Must

One bright sunny day, Bill dropped his daughter off at preschool in Boca Raton, Fla. Though the skies radiated light and hope, his heart was full of darkness and fear. Bill’s marriage was crumbling, and he was spiraling downward. A group of Spanish-speaking ladies were chatting in the school’s hallway, cheerfully speaking of their beloved church Iglesia Familia; the man’s ears perked at both their tone and conversation.

He gently asked for details. The women recommended their English-speaking sister church located in West Palm Beach. Though it felt a little awkward, Bill called Pastor Jimmy Scroggins at Family Church, and they met for coffee. Bill then started coming to church—first one Sunday, then another. As he slowly built a relationship with Christ, he could feel the pieces of his life fitting back together. Ultimately, Bill gave his life to Jesus.

“This all came about because of a gospel conversation,” says Scroggins, who trains and encourages members of his congregation to turn everyday talks into gospel conversations. “It’s not brain surgery,” insists Scroggins. “You may be at the ball field or in line at the grocery store and someone mentions a problem they’re facing. It’s an opportunity to share a similar difficulty you’ve endured and how the Lord led you through it.”

Scroggins grew up in the Bible Belt, having attended mostly white churches. But when he moved to South Florida in 2008, he entered a whole new world. Suddenly, 30 percent of the population in his county spoke a primary language other than English. Further south that number jumped to 70 percent. “I’ve had to change the way I think, the way I teach, the way I lead,” says Scroggins. It’s a linguistically, ethnically and culturally diverse environment that’s rapidly becoming more diverse by the day.

Because Palm Beach County houses more rehabilitation facilities than anywhere in the world, Family Church started a group called Recovery Church where people from all over the map come to seek treatment. “God is showing me how big and how lost the world is,” says Scroggins. “But it’s also exciting because a lot of people have been baptized from that group.”

The church, which was erected in 1901, once attracted white, upper- or middle-class citizens, but that has all since changed, and today’s congregation works hard to make the church a reflection of the community. “We don’t want to be a refuge from the community but rather a life-giving organization in the community,” says Scroggins.

To that end, they changed their platform. Gone are the formal services, complete with suits and ties, preaching from the pulpit and piping out only organ music. They offer services in both English and Spanish and have hired Hispanic, African-American and Portuguese pastors. “It wasn’t an affirmative action thing. It was a common sense thing,” explains Scroggins. The name also changed from First Baptist to Family Church, reflecting the sentiment that all are welcome.

To date, Family Church has created a network of seven neighborhood churches and in the past five years has successfully launched or helped to launch 15 more. Their goal is to start 100 new congregations in South Florida. Though aspirational, the goal is attainable, says Scroggins, because they’re training South Floridians to launch churches in South Florida. “We live on a vital mission field,” he notes.

Palm Beach County houses some of the wealthiest residents in the country, including Howard Stern, Rush Limbaugh, Tiger Woods and Jack Nicklaus. However, the county is also home to some painfully poor communities. “We’re unique in that we have billionaires in our pews sitting next to people on public assistance,” says Scroggins.

And then there are the out-of-the-blue moments that pop up—like this past Sunday when Pastor Scroggins baptized a Muslim who recently moved from Turkey. “The man told me that 20 years ago he’d had a dream that he was going to get to know Jesus,” says Scroggins.

There you have it. Dreams really do come true.