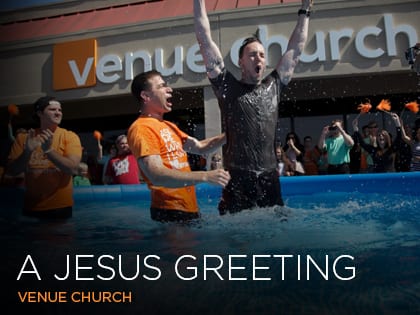 Nicole, who had been an atheist all her life, was driving down the highway when suddenly she felt an overwhelming presence in the car with her. “I felt something I’d never known before, and I distinctly heard someone say, ‘It’s me. I love you,’” recalls Nicole, who pulled over alongside the road and started sobbing. “Right then and there, I gave my life to God.”

Just two months earlier, she had been at a local park in Chattanooga, Tenn., on a day when Venue Church was doing an Easter egg drop. Nicole vividly recalled watching children run around the park squealing. But what stood out in her mind more than kids collecting colored eggs was the kindness that the people of Venue Church showed to her. That’s where she wanted to go.

When Nicole told her atheist husband Scott that she was now a believer, he was shocked but supportive and agreed to attend Venue Church with her. He, too, was immediately struck by the compassion extended to him by total strangers. After several weeks of attending services, Scott felt the same pull his wife had experienced on the highway.

“I realized that I couldn’t run from this God who loves me,” says Scott. “I wanted to be saved.”

“This story illustrates just how important volunteers are to connecting nonbelievers with Christ,” says Tavner Smith, lead pastor of Venue Church. “A visitor may respond to a sermon message, but it starts with that smile they get in the parking lot, the handshake they receive from the greeter, the host who shows them to the nursery. All of these welcoming experiences prepare folks for the Holy Spirit to draw them in.”

The church’s presence in the community is another key component; take Nicole and her memory of the kindness she experienced at the Easter egg drop. Venue Church members make a proactive effort to be out and about in the community. They do so by standing on street corners dressed in silly costumes and holding signs with the church’s name, location and worship times. They also knock on doors distributing invite cards. They write their church’s name on members’ car windows after Sunday service and—voila—they have 500 church billboards driving around town.

Speaking of cars, first-time guests to Venue get their windshields washed and receive a note that reads, “You deserve the best view of Chattanooga. Your window has been washed, compliments of Venue Church.” They do the same thing at parking lots around town. Smith estimates that volunteers wash 10,000 windshields a weekend. Such activities are both service and outreach. “Pray like it’s up to God, but work like it’s up to you—that’s our motto,” says Smith.

Currently, Venue offers six Sunday services—four in Chattanooga and two at other campus locations. Almost every service is overflowing, so there’s talk of adding two more.

“We’re really exploding,” says Smith, who notes that they’ve gained 500 members in just three months, which is both awesome and overwhelming. For some churches, it takes ten years to hit 2,000 members; Venue reached that milestone in 18 months. While that accelerated timetable sounds fantastic, Smith feels the weight of what God has called him to do. That’s why he continually surrounds himself with wise and seasoned veterans. He joins coaching networks, attends leadership workshops and regularly meets with trusted friends who offer council.

The goal is to ensure that everyone who steps inside Venue Church, regardless of age, race or socioeconomic status, feels Jesus greet them.

“It’s a breath of fresh air for people to experience our diverse congregation,” says Smith. “At Venue Church, we offer all who enter a freedom to worship, a freedom to be where you are and a freedom to let God—not people—change you.”