Home Features The Mystery of God Becoming a Man 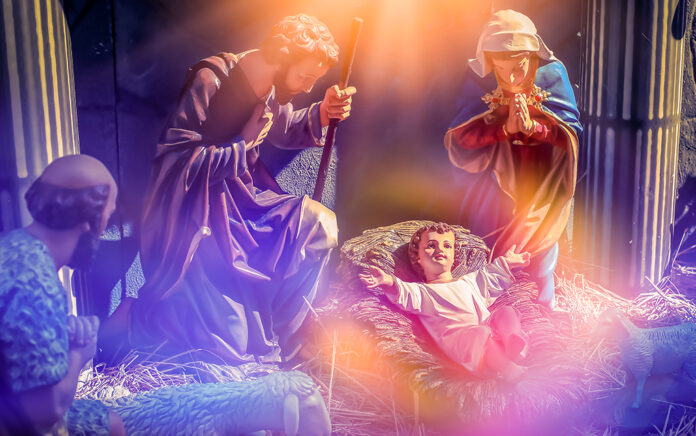 How the wonder of the incarnation gives us encouragement and strength

Two thousand years ago, a question was posed to a group of religious men: “What do you think about the Christ? Whose Son is he?” (Matt. 22:42).

This is a question that some of the greatest minds have grappled with over the years. And it’s worth noting that during the earthly ministry of Jesus, many were perplexed about who he really was.

To some degree, I don’t think even his disciples fully grasped his mission and who he was until his death and resurrection. In fact, when he was walking the earth, some thought he was Jeremiah the prophet. Others thought he was Elijah. Others even thought that he was John the Baptist, risen from the dead.

But for all practical purposes, Jesus Christ was God with skin on. He was the Messiah, God in human form, walking among us.

There are many today who say that Jesus was a wonderful prophet, that he was a great, godly man. But Jesus claimed to be God in human form. And not only that, he claimed to be the only way to have a relationship with God the Father.

In the New Testament book of Philippians, the apostle Paul wrote:

“Though [Jesus] was God, he did not think of equality with God as something to cling to. Instead, he gave up his divine privileges; he took the humble position of a slave and was born as a human being. When he appeared in human form, he humbled himself in obedience to God and died a criminal’s death on a cross.” —2:6–8

Jesus never became God. Nor did Jesus ever cease to be God. He was God before he was born, and he remained God after he became a man.

So in the Incarnation, in the moment when Jesus came to this earth and was born of the Virgin Mary, did he lay aside his deity?

No, Jesus remained God. He always was God and always will be God. I think the Christmas hymn “Hark the Herald Angels Sing” puts it well: “Veiled in flesh the Godhead see; hail th’ incarnate deity; Pleased as man with man to dwell; Jesus, our Emmanuel.”

Jesus never voided his deity, but he did veil it.

The Real Miracle of the Incarnation

We are given a glimpse of this in the story of his transfiguration. Jesus took his disciples Peter, James and John with him up on a mountain, and they fell asleep (which they often did at very critical times). When they awoke, there was Jesus, standing with two great prophets on each side of him. The Bible says that his garments shined like the sun (see Mark 9:3). He was radiant.

Now, it wasn’t a miracle that Jesus shined like the sun during his transfiguration. The real miracle was that he didn’t shine like that all the time. He veiled his glory, but there for a moment he let people see who he really was. He was indeed God in human form.

C.H. Spurgeon put it well when he said that Jesus was:

“infinite, and an infant—eternal, and yet born of a woman—Almighty, yet hanging on a woman’s breast—supporting the universe, and yet needing to be carried in a mother’s arms—king of angels, and yet the reputed son of Joseph—heir of all things and yet the carpenter’s despised son.”

Paul adequately summed it up when he wrote:

“You know the generous grace of our Lord Jesus Christ. Though he was rich, yet for your sakes he became poor, so that by his poverty he could make you rich.” —2 Corinthians 8:9

Jesus went from the throne of heaven to a feeding trough. He went from the presence of angels into a cave or stable filled with animals. He who was larger than the universe became an embryo. He who sustains the world with a word chose to be dependent on the nourishment of a young woman. God became a fetus. The Almighty appeared on earth as a helpless human baby.

The more you think about the fact that God became a man, that he became a baby, the more staggering it gets. And to be a true Christian, it is essential to believe this truth about Jesus.

Some would assert that Jesus never really claimed to be God. But as a matter of fact, he did. Jesus said:

That was a clear statement of equality with God the Father.

Jesus also accepted worship on many occasions, which was something that is reserved for God alone. In fact, in the wilderness when Jesus was tempted by the Devil to worship him, Jesus quoted Scripture saying, “You must worship the Lord your God and serve only him” (Matt. 4:10).

Jesus was underscoring the fact that worship is only to be given to God. Yet he accepted worship on many occasions because he was indeed God.

We also know that Jesus forgave sins, and only God can forgive sins. Mark’s Gospel tells us that on one occasion a paralyzed man was lowered through the ceiling of the house where Jesus was speaking. When he saw the commitment and faith of the man’s friends, Jesus said, “My child, your sins are forgiven” (Mark 2:5).

That sent the Pharisees into an uproar. They said, “This is blasphemy! Only God can forgive sins!” (v. 7).

Jesus did not empty himself of his divine attributes, but he did accept the limitations of humanity. We see this throughout the Gospels. We know that Jesus was tired, hungry, lonely and thirsty. He experienced all of this.

So the next time you’re tired, hungry, thirsty, weary or lonely, know that you have a God who understands what it’s like to stand in your shoes. He is the only one who can accurately say that he feels your pain. No one else can say that truthfully. But he can.