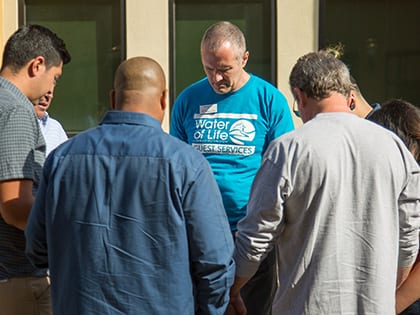 No. 42 Fastest-Growing: Water of Life Community Church in California Values Healing From the Inside Out

Dan Carroll, founding pastor of Water of Life Community Church in Fontana, California, did not start out intending to plant a church.

Twenty-eight years ago, he led a men’s Bible study in his home. Carroll, who was a missionary at the time, then left to minister in Malaysia. To his amazement, after moving back to California more than a year later, he learned that the Bible study still met weekly, waiting for him to return.

Eventually, the group asked Carroll to be their pastor. So, he put together a team and they rented a local child care center and held the church’s first service. Today, Water of Life Community Church also has campuses in Upland and Rosena Ranch, as well as a Spanish-language service called Agua de Vida.

The church, says Carroll, is on a mission to reach people and emphasizes mission work in places such as Cambodia, Haiti, Nicaragua and around the United States.

Fontana is the city where the Hells Angels Motorcycle Club began in the late 1940s. It is also home to the Auto Club Speedway.

“Fontana is blue-collar and working-class,” says Carroll. “It’s multiracial, multiethnic and multicultural, and that reflects our church.”

He credits Water of Life’s mission to teach the Bible as a major reason for the church’s rapid rise in membership.

“We make it funny, and we make it relevant,” says Carroll.

From Outreach Magazine  A Cross Section of the Surrounding Culture: New City Church

Another reason for growth is their willingness to be transparent with congregants.

“I talk about my weaknesses and my failures, my marriage and my failures in parenting,” says Carroll, “and we make fun of ourselves—we don’t take ourselves too seriously. We try to stay real and open. We work hard to make people matter.”

Moreover, Carroll says the church presents a less-formal structure during its services, which he says has attracted congregants. Sometimes, for example, he feels led by the Spirit to interrupt a worship service for a special altar call.

“We give the Holy Spirit the freedom to move and to heal and restore people,” says Carroll. “People leave our church talking about how they felt touched by God. One of our core values is healing, so we do lots of recovery, lots of inner-healing prayer. We have a large counseling ministry with 400 lay counselors who care for people.”

Doug Whiteman says the desire for inner healing is what drew him and his family to Water of Life more than two years ago. They joined after their daughter, Karley, returned from a church youth camp talking about being baptized in the Holy Spirit, speaking in tongues and physical healing.

“That was kind of new for us,” says Whiteman, “so we decided to go see what it was about. Pastor Dan kept talking about how you have to be healed from the inside out. We really didn’t know what was going on. We just looked at each other and said, ‘Wow.’”

Whiteman began attending the men’s ministry and Living Waters, a healing class, as well as an intercessory prayer class.

“Living Waters changed my life,” says Whiteman, recalling how one member told him that God was proud of him. That moment, he says, started the healing process in his life.

“She said there was no more condemnation. No more shame, no more guilt and that [God] knows my heart,” Whiteman remembers.

Today, he credits God and the church for helping to heal his relationship with his son. His wife and daughter recently completed mission trips overseas, and he supervises the ushers, greeters and the church’s shuttle ministry. He even volunteers with a local addiction-recovery program for men.

From the at-home Bible study to the massive church today, Carroll says that after 35 years in ministry, he believes integrity is the most important trait for leaders to have.

“I keep watching my friends fall,” says Carroll. “People have invested in their ministries and their churches, and they end up stumbling and falling out, and they lose everything over their integrity. You’ll never build anything without integrity.”