Home Ideas A Targeted Approach: Christ’s Church of the Valley 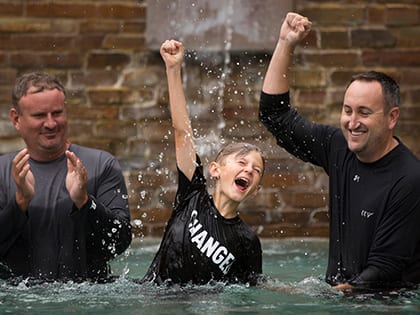 No. 26 Fastest-Growing: Christ’s Church of the Valley in Arizona Specifically Aims to Reach Husbands, Dads and Families

Years ago, Christ’s Church of the Valley (CCV) in Peoria, Arizona, found a simple but effective strategy to fill its chairs: Win over the man of the family. The staff had read that getting husbands and dads to attend church made it 90 percent more likely that the entire family would join in, according to CCV Executive Pastor Blue Van Dyke.

“We gear a lot of our environment around the unchurched man,” he explains.

The staff even created a fictitious would-be churchgoer named Mike Hoff to use as a prototype. If the team thinks that a particular idea would not resonate with Mike or, worse, make him run for the hills, they scrap it. On the other hand, if they conclude that broadcasting sports would make church more appealing to Mike, they indulge him.

“By no means is that [method] meant to exclude anyone,” Van Dyke says. “We love and minister to everyone, and we’re trying to reach everybody. We’re really going after a targeted customer so we can win the whole family.”

The “targeted customer” approach isn’t the only unconventional strategy CCV uses that distinguishes it from other churches. Although the typical large church has several ministries—be they for women, men or singles—CCV decided to streamline its ministry focus.

“We decided that we’d like to ‘do less better,’” Van Dyke says. “We really simplified what we do.” Doing less better means making a smaller number of ministries shine rather than stretching the staff thin to oversee several. Instead of men’s and women’s ministries, CCV offers neighborhood groups—known as small or life groups—and focuses on supporting adults, children, students and missionaries.

Reaching churchgoers in suburban Phoenix can be a challenge, Van Dyke says, because the metro area was No. 9 on Barna Group’s Least Bible-Minded Cities list in 2016.

“Phoenix is such a transient city,” Van Dyke says of its dearth of churchgoers. “The vast majority hasn’t had an upbringing here. It’s new. It’s urban sprawl.”

When Matt Figueroa first visited CCV as a college student in 1988, however, it made such a positive impression on him that he joined the church upon returning to the area after graduation.

“Back when I was in college, I got to meet the pastor, Don Wilson,” Figueroa recalls. “He immediately showed a personal interest in me because I was participating in athletics. I was a baseball pitcher. He would ask me about my college experience, and when he would speak in his sermons, he had a leadership quality … that inspired me and made me want to be all Christ wanted me to be. It was kind of a contagious thing.”

When Figueroa married and settled down, participating in a neighborhood group made him feel connected to the church. He’s since gone on mission and educational trips with CCV to Mexico, Cuba and Israel. He says newcomers to CCV often leave services inspired by the sermon, the worship music and the friendliness of churchgoers. He attributes CCV’s growth to the pastor being very clear that the goal of the church is to make disciples of all residents of Phoenix. Van Dyke says this simple mission strategy “is really embedded throughout the congregation.”

As a spiritual leader, Van Dyke has been surprised to see other churches embrace the Bible-college-meets-business-school approach to growth that has helped CCV succeed. For years, he watched church leaders resist using metrics and the like to spur growth, he says. But data-loving millennials have changed how churches operate.

“It doesn’t diminish the message,” he says. “It simply augments the tools that can help us be more effective.”