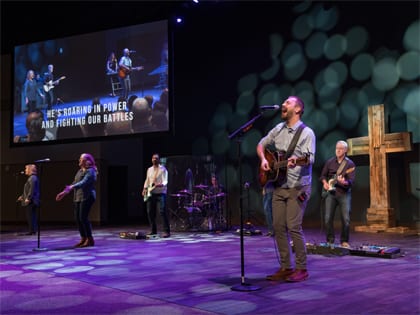 No. 9 Fastest-Growing: Cornerstone Chapel in Virginia Addresses the Culture With Truth, Knowledge and Hope

Ray Jones of Leesburg, Virginia, was brought up in a home with a great deal of arguing and animosity. Though he grew up in the church, he only went to services when his grandmother was in town. Having developed a bad taste in his mouth about religion, as an adult he abandoned church altogether. When his wife, Shelli, got pregnant with their first child and suggested they attend church together, he bristled at the notion. So, for seven years Shelli went to church on her own, all the while praying for Ray’s heart to soften.

Then, 10 years ago on their wedding anniversary, Shelli asked her husband if he would accompany her to a service at Cornerstone Chapel to celebrate their union. He didn’t feel like he could say no, so he reluctantly agreed.

“It was one of those weird nights where worship hit me hard and just broke me,” recalls Ray, who accepted Jesus soon after. A year later, he and Shelli got involved in a couple’s small-group Bible study. The church’s men’s group also helped Ray get his feet wet as a new Christian. Life was good.

Stress spiked, however, when out of the blue Ray lost his business—the family’s sole source of income. Just one week later, Shelli was diagnosed with cancer.

“It was a one-two punch,” says Ray. “We went through a whole year with no income. We were running on savings while Shelli endured heavy cancer treatments. Through it all, we watched as God stepped in and took care of our family.”

A year later, Shelli was in remission. Two weeks passed and, out of nowhere, a job opportunity opened up for Ray.

From Outreach Magazine  Pressure to Impress No One

“It’s been quite a journey with the church and with God,” says Ray. “I’ve grown in so many ways.”

And he’s not alone.

Gary Hamrick, pastor of Cornerstone Chapel, thinks one reason the church has grown is their systematic teaching of the Bible.

“When I first started to minister, I did the hunt-and-peck method where I would look through Scripture and try to find a passage to preach about. Now I go cover to cover, from Genesis through Revelation,” says Hamrick, who has found that more and more people are coming to church hungry to learn the Bible. “People are finding a desert out there among churches that are just not teaching the Bible anymore. Or worse yet, a lot of mainline denominations have departed from a belief that the Word of God is still the inspired, infallible, inerrant Scripture.”

Hamrick notes that society is also hungry for truth—even if they don’t necessarily agree with it.

“We’re living in a culture where truth has become watered down,” he says. “People aren’t sure anymore of what’s right and wrong, of what’s up or down. It’s a very confusing time.”

One thing that makes Cornerstone unique is that it’s a nondenominational church, something that Hamrick believes appeals to those in the area given the diverse demographics. Located 30 miles west of Washington, D.C., Leesburg is a suburban town that is very agricultural. Still, a good number of people in the area commute to work in the nation’s capital. As a result, every Sunday the pews are a mixture of plumbers, farmers and retired military.

When Hamrick planted this startup church 25 years ago, the congregation consisted of just 18 people. To see the tremendous growth over the years astounds Hamrick. Still, although the numbers have increased, one thing has remained the same.

From Outreach Magazine  On This Rock: Rock City Church

Seeing what God has done at and around the church is a daily reminder that through him, all things are possible.

“The moment I think that any of this is due to my cleverness or my skills is the moment it’s going to evaporate, so I always want to stay focused on whose church this is,” says Hamrick. “I can’t take credit for what God has chosen to do here. We marvel at his work.”