Home Ideas One Individual at a Time: Grace Church of Greater Akron 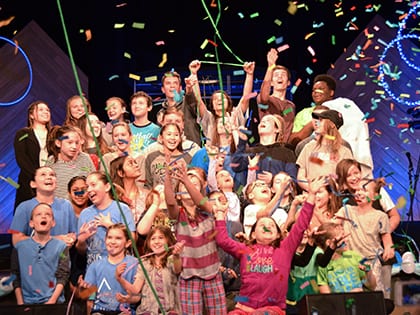 No. 80 Fastest-Growing: Grace Church of Greater Akron in Ohio Embraces a Heart for Evangelism

Nearly a decade ago, Tony and Kelly Vitrano had friends who asked if they could take the Vitranos’ children to vacation Bible school. After five days of praise and worship, the kids asked their parents to start taking them to church.

“We had two little kids begging us to go to church, and then two weeks later, one of my brothers was killed in a motorcycle accident,” recalls Kelly, who had no religious background. “My husband and I looked at each other and said, ‘There must be something more.’”

They started attending Grace Church of Greater Akron in Ohio and, according to Kelly, were lavished with love from the moment they walked through the door.

“Now, through growing our relationship with Christ, we’ve been able to love on others,” says Kelly, who, along with Tony, now serves in the youth ministry at Grace Church.

The Vitranos are just one example of how Christ builds a church—which, according to Pastor Jeff Bogue, is one individual at a time.

It’s a little-known fact that Akron is second only to Seattle in the number of cloudy days it has per year. With an average of just 41 sunny days annually, Akron’s weather certainly isn’t helping to drive folks to Ohio. In fact, the city’s surrounding community has not grown for a quarter of a century. As a result, Akron is stagnant, both numerically and economically.

From Outreach Magazine  Why Go to a Church Service When You Can Watch Online?

“This is certainly not an up-and-coming region. We don’t have a boom. We don’t have new industry. We don’t have good weather,” explains Bogue. “Because new people aren’t coming in [to the area], we have to reach the people who are already here.”

The church has eight campuses, all of which function more like church plants. They are one church, by all definitions, though their campus pastors preach and lead locally.

Disciplined in their focus to multiply, the church’s goal is that 10 percent of their weekend attendance would come to know Christ annually for each campus. With an average of 5,000 worshippers on a weekend, that translates to 500 people finding Christ this year at Grace Church.

“That’s what we’re praying for and working toward,” says Bogue, noting that they don’t engage in a lot of programs. “We try to release the people.”

Thoroughly committed to leadership development, Grace has its own undergraduate degree from Grace College located five hours away in Winona Lake, Indiana.

“We spend about $700,000 a year hiring interns and residents, educating and training them in ministry,” says Bogue, who is raising the ministry force to seed those campuses now and into the future. “We now have undergraduates coming from all over the country, getting a fully accredited Bible degree, and then we involve them in our ministry. So, they are learning ministry, being discipled and getting a real education simultaneously.”

Bogue often looks to Revelation 2:4 where God says, “You guys have taught the Word, but I hold this against you: You have forsaken the love you had at first.” It’s a concept Bogue and his staff have been emphasizing recently.

From Outreach Magazine  Prayer and the Coronavirus

“Let’s not think that we got good at doing God’s work,” says Bogue. “We have to be faithful, sacrificial, dialed-in servants where we find out what’s going on in a person’s life because that is still the way God builds the church.”

Checking in on and taking care of people is paramount to church growth, Bogue says.

“It’s easy to get distracted by programs and successes and think that there’s some substitute outside of getting to know people,” he says. “There’s not. I just came out of a meeting where I looked at my executive team and said to them, ‘Let’s call everybody. Literally. Let’s call everyone who is disconnected [from the church] and see how they’re doing.’”