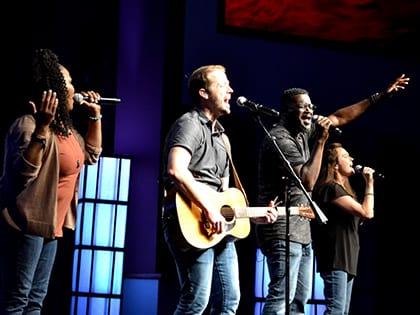 No. 55 Fastest-Growing: Vaughn Forest Church in Alabama Focuses on Trust, Communication and Unity

“Is it the healthy thing to do?”

For Eric Smith, lead pastor of Vaughn Forest Church in Montgomery, Alabama, growing a strong church culture starts and ends with this question.

“We always ask that when we face a decision. We base it on what Scripture teaches and where we’re trying to go,” he says. “We want to choose health—even when it’s hard and uncomfortable.”

For Smith and his team, “health” begins with a sense of trust among church leadership. “When you are trying to reach people, there will be friction and discomfort. We don’t think that there won’t be challenges. But can we have the hard, honest conversations and be real about what we are seeing and feeling?”

One example of health everyone agrees on is seeing the congregation grow spiritually.

“We want to equip people to live lives that honor God, which results in those people being more confident and passionate about sharing the gospel,” Smith says. “We’ve seen the Lord bless us with a lot of spiritual growth as people take new steps, get baptized, engage in life groups and then step up to lead a life group.”

Church member Alex Whitley had been part of an already-existing Vaughn Forest life group before he felt called to start his own.

“One of our strengths is we are a church that mirrors the community,” Smith says. “When people think of Montgomery, they may think we’re all white rednecks here, but we actually live in a very racially diverse community, and so our congregation and leadership are diverse.”

From Outreach Magazine  Insights and Best Practices from Healthy Churches

Not only does the church hold a Spanish service, but there also has been an influx of Korean families because the city is home to Hyundai Motor Manufacturing Alabama. Adding to the diverse congregation are members of the military who are based at local Maxwell-Gunter Air Force Base.

“We are a big military community,” Smith says. “We have military folks from as far away as Alaska stationed here, mainly young families. They may stay for a season or for longer. We see them as another one of our strengths.”

Whitley believes another of Vaughn Forest’s strengths is its balance between discipling its members and reaching out to the unchurched.

“The church does a lot of things to be active in the community,” he says, “from holding a petting zoo on the front lawn to having people dress up as Disney characters to take pictures with kids.”

According to Smith, reaching the community doesn’t just happen—it takes a missional mindset. “We try to think like missionaries would,” he says. “What would a missionary do to reach this city? So often churches lose this art and keep doing church like they always have done it. We try to be missional in the sense of how we are intentionally engaging people and how we’re strategically trying create an attractional environment.”

While its outreaches are varied and creative, the church isn’t afraid to pull the plug on an ongoing event, even when it is well-received.

“We have an intentionality of focus,” Smith says. “We wrestle with choosing what is great versus what is good, because a good thing can take you away from doing a great thing. We always ask what we need to stop doing so we can do what God has called us to do more effectively.”

He cites last year’s Fourth of July party as an example. “It was good, but it wasn’t the most effective outreach,” he says. “We also held a marriage conference that many people thought was a success. But even though it was good, it wasn’t great.”

As important as health and choosing great over good are to Smith, he also values seeking godly advice in making decisions, both big and small.

“Over the last few years, I’ve learned the importance of getting outside counsel. Pastors can fall in a trap of not getting counsel,” he says. “Our governance board speaks into my life, and I speak into theirs. It’s a team of wise, godly people representing different perspectives.”

Vaughn Forest’s commitment to cultivating trust, building honest communication and working toward unity has filtered out to the rest of the church, Smith says. “It has helped us have balance as we try to help people connect, grow and serve. Spiritual growth is what leads to numerical growth.”