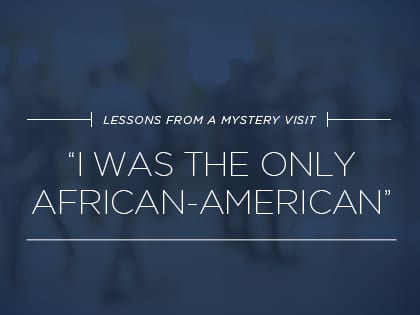 What was it like when you entered the building?
It was all love with handshakes and side hugs. This is New York City, so you have to welcome everybody like a newcomer. I asked for the bulletin and the greeter and usher pointed to a ledge.
✭✭✭✭✩

Was it obvious where the children’s ministry was located and that it was clean, secure and well-staffed?
The kids stayed with their families. Some ran around and others worshipped. If I had children, I would take them with me. The bulletin and website listed a lot of activities, including ones for kids.
✭✭✭✩✩

Did you observe anything that would lead you to believe that the church values diversity?
I saw Caucasian and Hispanic people, and I was the only African-American guy. I observed people of different backgrounds, but not other nationalities. They offered their website in Spanish and have a Spanish service. They could work on involving more of the community since the area around the church is diverse. Mainly older people attended.
✭✭✩✩✩

Describe the service.
A pianist played traditional hymns and another person led the music and a choir. The people sang along and some moved to the music. I followed along because I didn’t know the words or where to find them. It wasn’t my first choice of music, but they did a good job. During the service, understanding the routine would have helped me. The pastor preached from the Bible and read Scripture. The 40-minute message was positive and uplifting, but I’m an atheist so some things did not resonate with me. The pastor had a great delivery. He was conversational and used his hands when he was talking. He did not use visual aids.
✭✭✭✩✩

Overall, how friendly would you say the church was to you during your visit?
It felt like home, especially for them to be Caucasian and I’m African-American. I received no weird looks and they were nice. The greeters and ushers were the only ones who interacted with me outside the sanctuary.
✭✭✭✭✩

Would you return to the church?
It’s a good church with sincere and down-to-earth people. They welcomed me with open arms. I would return if I believed in what they were preaching. For someone who is looking for a church to call home, it was a great church, great community and it’s right in the smack dab middle of everything.
✭✭✭✩✩

Was the nearby community aware of the church?
I took the bus to church. The bus driver knew the location, but offered no details about the church. It was easy to spot as it took up a whole city block. I also Googled the church before my visit.

How was the seating?
Everyone spread out evenly. It was big church with at least 200 in attendance. I sat at the back and just blended in. It felt full, yet still had space for more people. Even though I was in the back, I could hear just fine and didn’t feel alone or empty. Most of the members stayed up close and I stayed in the back. I had a few people around me and they were close enough to smile and greet me during the service. I could hear the music and people were engaged.

How recognizable was the church signage?
They have a nice sign out front that lists the service times and the pastors’ names. Inside the church, I did not see anything specifically for Sunday school or kid’s ministry, but right when you walked in there was a lobby and the church worship space. They could add more signage, but for what I needed during my first visit, it was easy.

How was the post-service atmosphere?
I enjoyed the beauty of the church after the service; however, I did not interact with the pastor, just the greeter. The next service was starting so new people were walking in. No one really did anything or said anything. It was okay. If I wanted to make this my church home, and engaged them with questions, they would have done more. It’s the type of scenario where they were not rude or pushy, but they would be friendly and helpful. They have room to improve with those who do not believe (like me) or go to church regularly.

How would you rate the information resources?
This big church had staff people all over the premises. They have a Facebook presence and brochures. They are open seven days a week at all hours of the day, and they welcome everyone. People knew they were there and they connected well with the community. The website was just like the bulletin, it was translated into both Spanish and English with lots of information. They have a big staff directory, and things going on every day. This was a good thing since some churches do not have anything but Sunday services. I offered a tithe in the envelope and wrote my name, number, and e-mail on the envelope. I have not received anything from them at this time. I did not ask for more information, as it was just a collection envelope. The ten-page bulletin had lots of information to review. It was clear, if you were a member.

What is your overall impression?
They need to do more to add diversity to their congregation. They are in a diverse part of the city, but I did not see anything offered in other languages. They were not big on theatrical presentations like I am used to, but they did not make me feel out of place one bit. I enjoyed it and the people were nice.

An unchurched person reports on an unannounced visit to a local church. Adapted from a report provided by Faith Perceptions, which has evaluated more than 3,500 worship services across the United States. Visit FaithPerceptions.com.