Home Ideas 5 Ways to Use Google Hangouts for Outreach 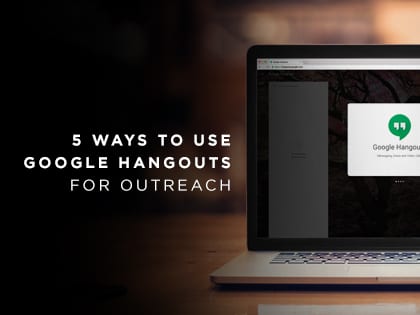 “Whether a participant is on a laptop, desktop or mobile device, they can participate in a Google Hangout.”

Regardless of how you feel about Google+ and its impact (or lack thereof) on social media, there is one major feature that has captured the attention of Google+ fanatics and everyone else: Google Hangouts (Hangouts.Google.com). Google Hangouts are an enhanced version of video chat, with up to 10 people simultaneously participating in a video chat. The add-on features, such as integrating YouTube videos, Google docs or screen sharing, have only made Google Hangouts even more attractive to people.

When thinking about Google Hangouts, the closest comparison is Skype and its easy-to-use video-chat features. Unlike Skype, Google Hangouts have the capability to be broadcast live via YouTube to an unlimited number of people; this feature alone makes Google+ an amazing tool for webinars and online broadcasts. Another great benefit is seamless mobile device integration. Whether a participant is on a laptop, desktop or mobile device, they can participate in the Google Hangout.

How can Google Hangouts be used for churches? Here are five ways.

1. Stream your sermons or Bible studies live, and record them on YouTube.

This feature is built into Google Hangouts; it’s a great showcase of how Google is merging all of its properties to work together.

2. Have interactive Bible study or ministry meetings that can also be recorded for record-keeping purposes.

Similar to the example above, you can have a pastor or church leader lead a meeting or Bible study and broadcast it via Google Hangouts and YouTube. Up to 10 people can interact with the pastor during this broadcast in addition to watching.

This option may not need to be broadcasted or recorded, but if the pastor or counselor is at the church and the person needing counseling is somewhere else, they can conduct an online counseling session using Google Hangouts.

This is a great marketing option for people to participate in online. A good example is where a pastor can call on a few of his colleagues and they can talk about a theological topic or an upcoming conference they are participating in. This online event can be broadcast live using Google Hangouts and YouTube and then recorded, as well. The MP4 file that YouTube creates can then be downloaded or shared on other social networks such as Google+, Facebook, Twitter and Pinterest.

5. Podcasts can be done quickly and easily.

Jason Caston (@jasoncaston) is a creator, innovator, speaker, online business specialist and author of several books, including The iChurch Method series. He blogs at iChurchMethod.com.