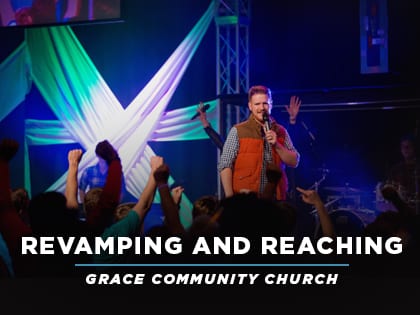 No. 88 Fastest-Growing: Grace Community Church in Pennsylvania Connects With Community Through New Approaches

A large garage door opened at Grace Community Church in Cranberry Township, Pennsylvania. Smoke and haze poured out, and Star Wars-themed music filled the air. Actors in Jedi costumes provided a top-notch theatrical sound and light experience offering “Jedi Knight training” to some of the hundreds of kids who attended the church’s Fall Frenzy in 2015. Each child was assigned a light saber and at the conclusion of their training fought Darth Vader to save the universe.

According to Family Pastor Justin Dosch, Fall Frenzy isn’t a typical fall festival, but rather, a “fall festival on steroids.” The Frenzy includes live music, food trucks, hay rides, inflatables, an indoor candy hall, a “highlands games” area, and princess and superhero rooms, where kids dress up or wear Incredible Hulk gloves and smash through walls. Approximately 1,500 people attended, and it was common to hear statements like, “This is the coolest church ever.”

Grace’s fall events haven’t always been so innovative. In the years prior to last year’s Frenzy, the church’s fall activity was a trunk-or-treat giveaway where kids would come, get candy and leave.

“We finally said, ‘This is lame. We’ve been doing it too long and we need to blow this up and do something totally original,’” Dosch says.

This willingness to evaluate and revamp is working for the church, which has grown by several hundred people in the last year after stagnating for several years prior. One of Grace’s recent changes was streamlining communication.

“If we had a parent in a small group with a younger child and a child in middle school, they were getting four emails weekly,” says Marketing and Communication Director Brandon Jones. “If that’s me, I don’t open them. Today we keep it laser-focused.”

Instead of every department communicating independently, one churchwide newsletter goes out monthly with critical information. In addition, the staff has put more focus into the church’s website and communications during services.

“It’s awesome if you have a great vision, but it doesn’t work if you aren’t communicating well,” Dosch says.

In addition to revamping communications, the church has changed the way it approaches working with staff and volunteers.

“For two or three years we had some major turnover on staff,” Dosch says. “From a hiring standpoint we went back to the drawing board.” Dosch says Grace had hired people from outside the church that had the right skillsets but didn’t fit the culture. Today, of the 23 people on staff, about 17 or 18 were hired from within the church.

With a lean staff, Grace relies heavily on volunteers and has recently put more of an emphasis on investing in them.

“[We had] a revelation that we weren’t taking care of our volunteers and honoring them like we needed to,” Dosch says.

The church has instigated a two-pronged approach to honoring volunteers. First, the staff has opened exclusive “volunteer rooms” on weekends: One is a place with snacks and couches available for volunteers to relax and connect, and the other is a room for their kids.

“What we were hearing is that people couldn’t volunteer on Sundays because their kids had nowhere to go,” Dosch says. So, instead of sending the kids of volunteers to children’s church twice on a Sunday morning, they now have a space to “have fun, hang out and feel honored” while their parents serve.

Second, the church honored volunteers this past January by holding a special volunteer party. Pastors served hors d’ouevres and cast vision for the future. Around 600 volunteers showed up.

“If you have a healthy core, that encourages growth,” Jones says. “Building up our volunteers did nothing but help us by keeping them coming back empowered and enthusiastic.”

And the vision they are casting is one of the church’s namesake: grace. Woven through their strategic decisions is a theme that Grace is a “place you can belong before you believe.”

According to Sam Huff, who began attending in 2012 and now serves as a volunteer in tech and marketing, it was this theme that made him stick around.

“The churches I grew up in,” Huff says, “it was always kind of, ‘Fix yourself. Once you talk like us, and dress like us, and act like us, then you can get involved.’ [Grace] takes the opposite approach: ‘You’re still checking out God, you don’t have yourself cleaned up yet? That’s fine. We want to partner with you.’”