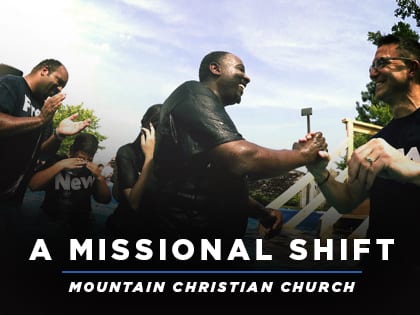 No. 41 Fastest-Growing: Mountain Christian Church in Maryland Seeks to Bless and Serve Its Region

Since 1824, Mountain Christian Church has been a part of that changing community, residing 30 minutes from Baltimore. There are some aspects of the church that have predated Kastens’ 15-year tenure there—there’s always been this concept of “building beyond ourselves” and working toward the future, he says. Yet, Kastens believes the culture of the church evolved in 2004, when leadership decided to take a look at how it could influence its community in a more tangible way.

“Something shifted. We weren’t just about evangelizing anymore; we broadened that focus to bless and serve our region,” Kastens says. “It took changing the perception of this being just a megachurch that congested all the roadways. We wanted to become the church of the community. We forged relationships and partnered with the county agencies and the schools.”

An event called Second Saturday Serve gets people out of their seats and into community-service activities for any skillset, age or area of interest. Whether it’s mulching or cleaning, painting or planting, churchgoers from all three campuses are serving in the community.

Kastens cites the church’s relationship with the homeless-shelter network Harford Family House as an example of the church’s cultural shift. He says the caveat of having relationships with an established group is that “the cause has to be something you have enough of an alignment with.”

“We both care about helping people transition from homelessness to housing,” Kastens says. “They don’t have to sign off on our mission statement. For any established group, if they’re doing something great, why not come alongside them and help?”

Kastens says the church has also shifted from program-heavy thinking to a more missional strategy, including helping those who go on mission trips to think about their own community back home in new ways. Not everyone is called to full-time overseas missions work—the driving question, Kastens maintains, is this: “How do I live my life on a mission without getting on a plane?”

Mountain Christian Church’s relationship with the city of Joppa has strengthened immensely, Kastens says. Even in the face of tragedy, the bond is apparent. When two county sheriff’s office deputies were killed in a tragic shooting incident in February 2016, the church shut down all of its services for the weekend and hosted the funeral services for the officers. It was the first incident of its kind in the area in more than 100 years, and thousands gathered to pay their respects.

Still, Kastens knows that when a big church comes knocking at any establishment’s door, there’s still a potential to hear that question: “So what’s the bait-and-switch here?”

“You just got to go in there and serve and love them,” Kastens says. “Jesus will do the rest.”