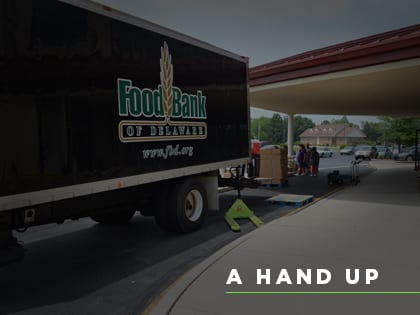 Calvary Church’s ministry that has been labeled the 2014 and 2015 “Food Bank of the Year” by the Food Bank of Delaware.

A man in his early 40s lost his job with no notice and due to no fault of his own. He was behind on his rent and taking care of his wife and three kids. During a snow storm he came to the food pantry of Calvary Church in Dover, Delaware, saying he wanted to “pray for a little bit,” and refusing to accept financial assistance.

Margaret Young, the benevolence director at Calvary, gave the gentleman a snow shovel and asked him if he could use it to make money. He agreed and returned a month later, saying, “I don’t know much about tithing, but I made some good money with this shovel and wanted you to have this.” He donated $92 back to the church and asked to keep the shovel.

It’s a perfect example of helping people help themselves—which is one of the principles of Calvary’s ministry that has been labeled the 2014 and 2015 “Food Bank of the Year” by the Food Bank of Delaware and serves more than 14,000 people annually.

Offering the only emergency food service in the county, 76 volunteers work in rotation. About 40 percent of the volunteers come from the church of around 1,750 in Sunday morning attendance. The other 60 percent come from people who received assistance in the past and want to give back. People—from construction workers in rainy seasons to realtors in a down economy—have received help.

In order to encourage self-sufficiency, Calvary offers regular classes on topics like establishing a credit score, budgeting and purchasing a first home. These classes are well-attended and leave some people in tears when they realize the financial possibilities they hadn’t grasped before. “A church’s responsibility is to change their community,” Young says. “We want to impact our community with compassion and relationships.”