Home Ideas We Plan, But God Directs: The Bridge Church 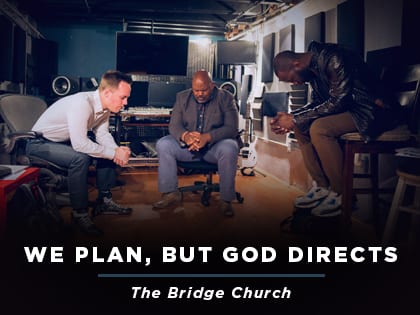 “We learned an important lesson that week: Sometimes God calls you to exchange your plans for his, in order to care for his people.”

The Bridge Church: Update No. 1

A man’s heart plans his way, but the Lord directs his steps.

That saying, recorded in Proverbs 16:9, is critical to embrace in church planting. It’s possible to invest a lot of energy, resources and time into a big outreach in the neighborhood only to have rain cancel it, or bring in a major band only to have them back out because of illness. What happens in those situations tends to tell us more about ourselves than business as usual ever could.

Our church experienced this the Sunday after the tragic shooting deaths of Alton Sterling, Philando Castille and five Dallas police officers. The sermon, worship set and the entire service had all been dutifully planned ahead of time. But by Thursday, we were aware that everything had to change. Our young, urban church plant, The Bridge Church, was very shaken by the news of the shooting deaths. Fear gripped the hearts of some because their husbands, cousins and sons fit the profile of the two who were shot. Anger filled others over the unjust police officers’ deaths in Dallas. Big questions like, “Why would God allow this to happen?” were being asked during the week. Clearly, the context of this Sunday had changed dramatically.

But the national conversation and crisis brought an opportunity to shepherd people through a very sensitive moment. Our elder-led church corresponded through emails and texts and changed the entire plan for Sunday. The worship leader identified songs that would comfort and help people cry out to God. The preacher adjusted as well, changing his text and his message with just two days to prepare. We added a time of prayer, with one of our black and one of our white elders praying together to display unity. We shared a reflection from Lamentations on the value of mourning, and we reaffirmed God’s heart for justice. All five police officers and the two shooting victims were named and their families prayed over.

We set up process groups to help people pray and discuss how they were feeling about the tragedies. One church member, a young black man, went to the local police precinct a few days later to introduce himself and learn how he could support their efforts to maintain peace in the neighborhood.

We learned an important lesson that week: Sometimes God calls you to exchange your plans for his, in order to care for his people. In planting, Proverbs 16:9 is an important verse to keep close:

A man’s heart plans his way,
But the Lord directs his steps.

We must be diligent to plan and prepare. But we must also be sensitive to respond to possibility of the Lord changing those plans based on the needs of his people. When we do that, we make Sundays a special time for people to connect to God and each other in very meaningful ways.

Rasool Berry is pastor of leadership development at The Bridge Church in Brooklyn, New York.