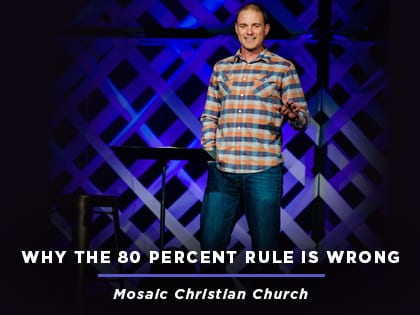 “Have we been killing the very vibe that attracts people to church in the first place?”

The first was a college basketball game in Washington, D.C., on a Thursday night in an NBA arena. My wife and I were pumped to have tickets and climbed to our seats in the upper deck. As soon as we got to our section I realized, “Oh, we practically have this section to ourselves.” Although the game was on national TV with two ranked teams, there ended up being only about 12,000 people there that night, meaning one-third of the arena was empty. My team won, we had fun, we went home.

Contrast that with game No. 2. Once again it featured two ranked teams, but this time, as I climbed to my (very high up!) seat, I realized not one of the 21,000 seats was empty. My team lost this time, but you know what was strange? I had more fun at the second game! A packed room made the event more exciting.

It reminded me of something we’ve been learning at Mosaic Christian Church, and it’s our conviction that the 80 percent rule doesn’t apply.

Let me backtrack. Experts will tell you that once a room or environment is 80 percent full, it’s considered 100 percent full to the guest. Therefore, the guests will leave, never come back, never hear the gospel, and they will experience eternity separated from Christ, just because we selfishly didn’t plan well. So we spent a lot of time our first few years trying to have more than enough room—we had dozens of empty seats in every service, always opened more groups than we needed and never turned people down for local impact teams.

But then we stumbled into something that made us change our view. It was Christmas Eve several years ago, and our service had so many guests show up that we were doing everything we could to create room on the fly: We had to set up folding chairs, we brought in rolling office chairs, we even had people seated on the floor. And you know what happened? People complained and never came back.

NO! They loved it! There was an energy and vibe in the room that you can’t get without it being over capacity.

During the last couple years, we’ve learned that instead of ensuring we have more than enough space, it is sometimes better to have barely enough space. What happens then is you create energy and momentum. Think back to the basketball game: Would you rather be at an arena that’s 100 percent full or one that’s two-thirds full? Which one has more energy? The one that’s packed! A 5,000 seat arena that is 100 percent full has more energy than a 20,000 seat arena that’s only half full.

So we’ve started applying this in various ways. For example, for our first men’s retreat, we capped it at a number below what we thought we could get if we pushed it for weeks on end. We announced a sign-up date online, and the retreat was full within 20 hours. In fact, one man in our churched asked, “If I drive there without asking anyone and sleep in my car, do you think I can attend the sessions?” What happened is we created momentum by limiting participation. Now people wear it as a badge of honor that they got into the retreat. They will come with a heightened sense of expectation, and next year people will be even more excited to sign up.

Obviously the goal is to spread the gospel to everyone. But we have been asking, have we been dying on the hill of having extra seats, with the unintended consequence of killing the very vibe that attracts people in the first place?

The easiest comparison to me is a movie versus a ballgame. At the movies I love the “buffer seat” between me and the stranger next to me. At a sold-out ballgame I don’t have that luxury. But which environment do I want my church to emulate: a passive show where people come in anonymity to be entertained, or an involved audience that is part of what is happening and influencing the outcome?

When it comes to the vibe I want to experience with our church, I’ll take the ballgame over the movies any day of the week.