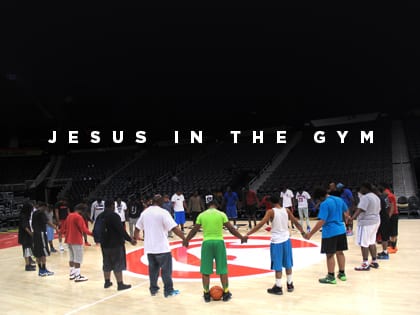 The scene shocked an onlooker: Two men standing in a prayer circle in an old gym one Sunday afternoon—the same two gang members he had seen, days earlier, shooting at each other in the street.

“Bloods, Crips, Vice Lords,” says Pastor Todd Kincaid, listing gangs represented in his “Jesus in the Gym” basketball ministry. “To get them in the gym was a miracle.”

But that’s who showed up once Kincaid, a pastor at Honey Rock Victorious Church in Knoxville, Tennessee, average attendance 175, started the ministry in 2013.

“You talk about tension for the first year,” Kincaid says.

In a rented gym, about 80 men play every Sunday, first holding hands with peers—or enemies—before each 10-minute game. “They can’t play until they pray,” Kincaid says.

Banned men must apologize in a prayer circle before playing again, and some admit mistakes immediately, adhering to the ministry’s motto: “When you mess up, fess up.”

As for once-problematic cussing, Kincaid began deducting a point for every foul word. “They hate to lose,” he says.

Players have thrown basketballs and chairs at Kincaid, and threatened him. Sometimes he wants to quit, but he loves the mostly fatherless young men as sons anyway.

Kincaid himself served prison time, and God changed him. He believes the participants, sometimes in and out of jail and running from bullets, need Christ’s love, too.

He’s taken them to play in Philips Arena, where the Atlantic Hawks play, and expanded the ministry to Monday evenings.

Now some of the men attend church or get jobs, prompted by Kincaid’s encouragement.