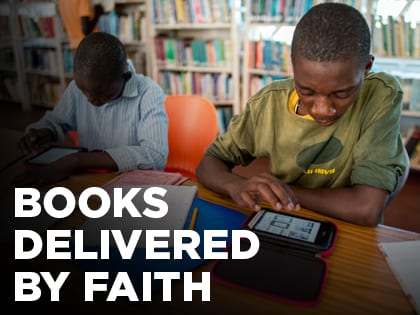 Community UMC and Mt. Harmony-Lower Malboro UMC partner to deliver e-books to children across the world.

In 2015, Charlie Moore arrived in Zimbabwe with an e-reader, which he delivered to the headmistress and administrators at the Murewa Mission School. The facility had few books or computers available to their students.

“They were excited,” says Moore, a layperson at Community United Methodist Church (CUMC) in Crofton, Maryland, which has about 200 attendees on Sundays. “They couldn’t get their hands on the device fast enough to try it out.”

Moore’s church recently partnered with another Methodist congregation to donate e-readers produced by the San Francisco-based nonprofit Worldreader. The organization provides e-book devices through sales and donations to locations where bound books are scarce.

The idea of donating the e-reader started when Rev. Faith Lewis, the pastor at Mt. Harmony-Lower Malboro United Methodist Church in Owings, Maryland, heard a Worldreader representative’s lecture at the 2014 United Methodist Game Changers Summit. The event brought church leaders, entrepreneurs and others together to examine how communication technology could bring positive social change.

Afterward, while lunching with two members of the Baltimore-Washington Conference of the United Methodist Church, Lewis learned about CUMC’s longtime support for the Murewa Mission School.

So Lewis contacted Moore and asked if he would deliver an e-reader to the school. In 2015, he did, and when he returned with news that the school officials liked the device, both Lewis’s and Moore’s congregations collected donations to buy more Worldreader e-readers.

As a result, Moore returned to the school this February carrying 75 e-readers, each preloaded with about a hundred books—half in English and half in Shona, Zimbabwe’s native language.

“It caused in our hearts the inspiration to continue reaching out and believing for what we couldn’t see,” says Lewis, whose church has about 130 in attendance on Sundays, “and believing on behalf of people we’ve never met that we could share resources.”