Home Ideas Church for the Homeless: Shades of Grace in Tennessee 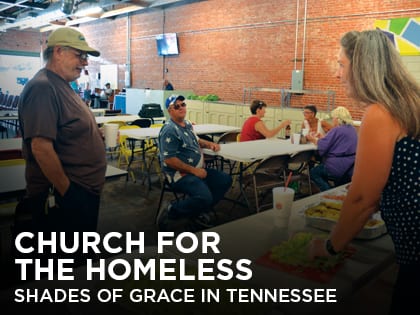 United Methodist congregation in the Appalachian Mountains has become a haven for the homeless.

On a blustery Sunday morning last winter, Will Shewey, pastor of Shades of Grace Church in Kingsport, Tennessee, arrived at work to a horrific surprise. Lying on the frozen, snowy ground, a woman with a fractured skull, broken ribs and swollen cheeks was shivering beneath a blanket. Covered in abrasions, bruises and cigarette burns, she had been raped. Shewey recognized the woman as a prostitute and drug addict who sometimes attended services at Shades of Grace.

“She came here for help because she knew we wouldn’t judge her,” says Shewey. “She comes here for worship for the same reason.”

Shades of Grace, a United Methodist congregation located in the Appalachian Mountains, first opened its doors in August 2014. The church was conceived by Shewey, a pastor with over three decades of experience. He wanted to build a church where members would neither chastise nor criticize but rather embrace and empower all who entered.

Shewey admits he never expected it to become a haven for the homeless, though that’s what has come to pass as 70 percent of the congregation lives on the streets.

Though Shewey has served traditional congregations for much of his career, the Holy Spirit called him to minister to those whom traditional churches can’t reach. “I felt moved to love the last, the least, the lost and the lonely,” explains Shewey. This includes widows, orphans and strangers as well as those who are abandoned, misplaced and misunderstood.

The ministry works to create a DNA of acceptance among members so that no one feels inferior to anyone else. He cites Proverbs 22:2, about the rich and poor and how the Lord is the maker of everyone.

The church offers hot food, fresh clothes, a warm shower and the promise of God’s nourishing Word. Sunday worship, which typically draws close to 300 people, begins at 4 p.m. and lasts two hours. “At least a third of that time is spent at the front of the church in prayer,” says Shewey.

One Sunday, a woman who had the markings of a meth addict—scabs on her face, missing teeth—began sobbing for her babies, who had been taken away as a result of her addiction. “We stopped what we were doing and began praying for her right then and there,” says Shewey.

The biggest difficulty in working with the homeless population is substance abuse, which is why Shewey measures success in ways that other congregations do not. “It’s a struggle entering into the walk with these folks because we see their progress and sometimes they fall back into bad habits with old friends,” says Shewey. “Our mission is to love people where they are because only God can fix someone’s heart.”

Shewey has witnessed tragedy in the last year. For instance, several months ago, a homeless man murdered a homeless couple by dousing them with gasoline and lighting them on fire. Shewey later learned that the man was a convicted arsonist and murderer. “All three of them had worshiped with us the Sunday before the homicide,” says Shewey. “That’s a hard reality to process.”

The emotional ups and downs can be taxing. Shewey says that just last week he baptized someone. After that joyful service, he stepped outside to see another member being hauled away in handcuffs. “It’s a daily roller coaster,” says Shewey. “We ride the highs and the lows.”

Concerns about safety, as well as the sheer emotional toll this type of ministry takes, make volunteering difficult for some. For example, the weekend following the Charleston church shooting, a gang member who had been coming to Shades of Grace for several months for meals, Bible study and worship showed up at service one morning and, through gritted teeth, told the greeter, “I need help, and I need it right now.” It was evident that he was in a bad place.

From Outreach Magazine  Handbook of Denominations in the United States

The greeter asked the man if he was suicidal, and he responded, “No, I’m homicidal.” The elders gently escorted him outside and waited with him for police and paramedics to arrive. “He came to the church because he knew he would be cared for, not condemned,” says Shewey. “The fact that he approached us instead of acting on those hostile feelings shows God working in his life.”

The church building, open seven days a week, is run by volunteer staff. Though they function as an emergency shelter when the temperature drops below 15 degrees, they cannot operate as a homeless shelter because they aren’t licensed in the city.

People often say that Shades of Grace seems like the kind of place where Jesus would hang out. “That’s why we call it God’s living room,” says Shewey.

And like an inviting living room, folks are drawn back, time and again. The battered woman who sought shelter last winter after her attack recently returned to the church holding a white long-stem rose. She handed the flower to Pastor Shewey and said, “This rose symbolizes you saving my life.”