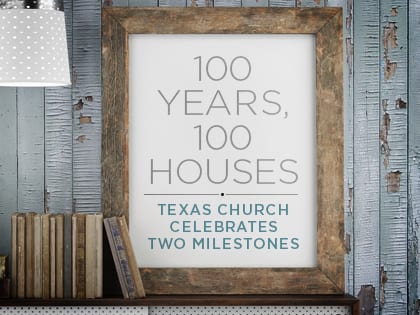 Jane Parker doesn’t swing a hammer much, but she is the volunteer coordinator and unofficial quartermaster for Highland Park United Methodist Church in Dallas, Texas, when it builds a Habitat for Humanity house.

Friday nights often find her at Sam’s Club, loading a van with bottled water and snacks to hand out during Saturday morning construction.

“I’m hostess and Nurse Jane, too,” Parker said. “I get Band-Aids for mashed fingers.”

There have been a lot of those¬—and a lot of everything—over the last 20 years.

In February, the Dallas church met its goal of constructing 100 Habitat houses, having built the first in 1996.

The timing is sweet, since Highland Park United Methodist also is celebrating its 100th birthday. The church has its own Habitat construction team, Carpenters for Christ, and everyone wanted the big round number to stand for homes built as well as years passed.

“It’s nice to see the top of the hill,” said Ed Wilson, who chairs the laity volunteers who make up Carpenters for Christ. “And then (we) move forward.”

Indeed, the Feb. 27 event dedicating the 100th house also included the dedication of the 101st house.

Church volunteers have been working on them simultaneously. The structures are across the street from one another in the historic but impoverished south Dallas neighborhood of Joppa, established as a freedmen’s settlement after emancipation.

With about 16,000 members, Highland Park United Methodist is one of the denomination’s largest churches. It’s in an affluent part of Dallas, right by Southern Methodist University. Church members include former President George W. Bush and his wife, Laura.

Highland Park United Methodist has long been known for its outreach ministries, including an eye clinic in Haiti. After Hurricane Katrina in 2005, the church raised some $4 million for relief efforts.

In 1995, the Rev. Mark Craig, then pastor, preached a sermon in which he challenged the Highland Park congregation to make a significant contribution in the low-income area of south Dallas.

By the next year, that vision had focused on having Carpenters for Christ build Habitat houses. The well-known Habitat model depends on volunteer labor and financial and material donations to keep costs low. Needy families acquire the homes through “sweat equity”—helping with construction—but also through modest monthly payments.

“The single biggest thing I like about Habitat … is that we give people a hand up, not a hand out,” Wilson said.

By 2002, Highland Park had, under Craig, committed to a long-term goal of building 100 Habitat houses in the Dallas area. The church has clipped along at the rate of about five a year. (Six were “WillieBuild” houses, dedicated to the memory of Willie Tichenor, a beloved member of the congregation who died of osteosarcoma at age 19.)

The church also committed to financing construction of 200 Habitat houses outside the United States. The achievement of that goal—with houses built in 10 countries, including Afghanistan—is yet another part of the centennial observance.

“Really, we’re celebrating 300 families that have been impacted by this church,” said Eve Kyomya, senior development associate for Dallas Area Habitat for Humanity.

From Start to Finish

SMU students are regularly among the many volunteers building Highland Park’s habitat houses. But reaching the 100 houses goal has depended on a cadre of experienced hands.

Parker, the volunteer coordinator, has worked on more than 80. Wayne Chaffin started with the first house and just kept going.

“After about house number 20, I said, ̒Well, I wonder if I can put at least a day in on every one of them,’” he recalled. “If my bookkeeping is right, I’ve done that.”

Kathy Adams, who is on the church’s centennial committee, said longtime workers like Chaffin represent a ministry within the Carpenters for Christ ministry, helping inexperienced volunteers learn skills and feel at ease and useful.

She, too, is pleased at the 100-house milestone, which represents about 200,000 volunteer hours.

“Think about all the hands that have had a part in this,” Adams said.

“Our partnership with Habitat has created a way to develop not only generosity through capital, but (also) through time and labor in a very meaningful and beautiful way,” Rasmussen said.

For the Feb. 27 dedication, Highland Park invited all of the families whose homes it has built. The original owners occupy nearly all of the homes, and the homes and their residents have helped with neighborhood stability, said Joe Fortson, outreach associate for the church.

“Highland Park leadership has played an integral role in developing communities both in Dallas and around the world,” he said.

The 100th house went to Eh and Thay Lay, Burmese refuges (by way of Thailand), and their four children.

He apologized for his limited English, and then offered a simple declarative sentence: “I’m so happy.”

This article was originally published by the United Methodist News Service.