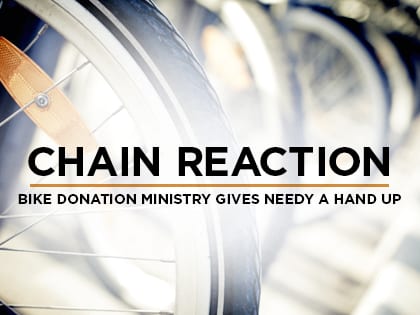 It may not be surprising that a ministry that helps people travel would do so itself.

That’s what has happened with Chain Reaction Ministries, a group that provides bicycles to those in need. Rev. John Malget brought the idea with him when he moved from a Houston area church to First Christian Church of Oklahoma City. Since adding this “spoke” (the ministry’s moniker for offshoots) of Chain Reaction, they’ve given away 1,400 bikes to help people commute to their jobs in Oklahoma City.

“We like to refer to this as a hand up,” says Larry Batten, who heads the ministry at First Christian Church, “not a handout.”

The group caters to everyone—as long as they’re in need and employed—including the homeless. Once they provide proof of a job and the need for a bike, they receive one that has been thoroughly checked for dependability. The church never purchases bikes for the program; every bike that comes in is donated. This means there are periods in which donations are thin. “But for whatever reason, God ends up kicking folks in the tail to get us more bikes,” Batten says with a laugh.

Since the effort began in 2013, Batten has garnered relationships with 20 local groups, like the area’s Homeless Alliance, Housing Authority and Veterans Affairs office. But the group’s outreach extends even further: Every mechanic that works on the bikes is homeless or has been homeless, Batten says. And if everything goes well, those applying to receive a bike might come back down the road for a different reason.

“What we see is that some will get a job and get a bike, and then get some money for an apartment,” Batten says. “After that, they save up more money and get a car. And then, they end up donating the bike they received from us.”

From Outreach Magazine  Lead Your Church Beyond Addition to Multiplication

“We’re just trying to help people better themselves,” he says. “That’s what it’s all about.”