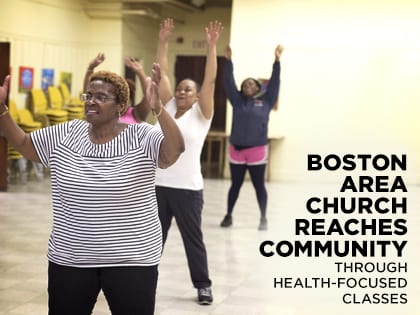 The Intersection church meets unique needs in its neighborhood: a free way to exercise and a means to eat nutritiously.

When Rita Shuler began attending The Intersection—a Boston-area church plant of the Evangelical Lutheran Church in America—a few years ago, she suffered from painful arthritis in both knees that limited her movement. Her diet wasn’t great either, as she hardly ate vegetables.

Now, thanks to weekly Zumba classes and a monthly Change of Heart healthy cooking course, she’s getting around better than ever and learning how to prepare nutritious meals at home.

The classes—which are free, thanks to donations and grants the church receives—are part of the congregation’s mission to link faith in Christ to every area of life.

Shuler reports that Zumba has helped her spirit, too, since it follows Tuesday evening Bible study. “Not only do I get healthy, but I learn more about the Bible,” she says.

The classes have attracted about two-thirds of the church’s membership. That’s because they meet unique needs in the church’s Dorchester neighborhood: a free way to exercise and a means to eat nutritiously.

The neighborhood, says pastor and mission developer Tiffany Chaney, is home to a diverse group of people, including some families who can’t afford pricey gym memberships.

“As I began exploring this community and getting to know people, it became clear, and even in my own experience as an African-American woman, that care for our physical selves is important alongside caring for our spiritual selves,” Chaney says. “We are to be good stewards of the resources God has given us, and our bodies are one of those resources.”

According to the Centers for Disease Control, heart disease is the leading cause of death for African-American women, a problem that exercise and healthy eating can remedy.

In January 2013, Zumba classes began as part of a four-week Bible study on caring for the physical self. But as more and more people showed up, Chaney quickly realized the classes were their only way to work out, especially since they could bring their kids. So the weekly classes continued beyond the four weeks of the Bible study.

From Outreach Magazine  Today's Moment of Truth: Created in the Image of God?

“It became a vibrant part of what was then a very new ministry,” Chaney says.

Last May, The Intersection added the Change of Heart cooking class to its Body and Soul initiative. The class started out with 11 participants and followed a six-month Tufts University research study that examined the relationship between community involvement and heart-healthy behavior in African-American communities.

“That led us to understanding better nutrition for ourselves and also led us into the community to explore the need for heart-healthy behavior,” Chaney says. “We discovered that other kinds of ministries were already meeting food access needs, but what was missing was really a way to prepare heart-healthy foods.”

Thus, the cooking class was born. Once a month, 20 spots fill up with locals eager to learn to cook with their heart health in mind. Volunteers teach the classes, and each participant leaves with a $25 gift card to the supermarket so they can purchase the ingredients and try the recipe at home with their families.

“This is an area that’s ripe for engagement of people in the community,” Chaney says.

And through health-centric outreaches, The Intersection is engaging its neighbors, body and soul.