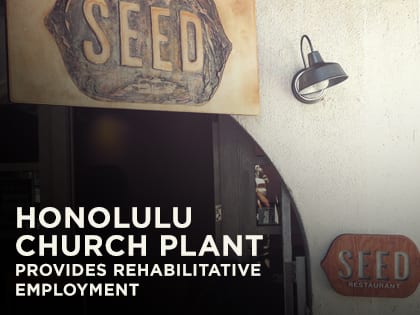 Bluewater Mission opens restaurant to care for those affected by human trafficking, incarceration and homelessness.

When Mary Nelson came off the street and into a baptism service at Bluewater Mission in Honolulu, Hawaii, she told the pastor that she would be back out working on the street as soon as he finished baptizing her.

He says now, “She gave God a crack in the door.”

Since that time, Nelson has become a spokesperson for the transformation that comes with knowing Jesus. She serves as the star hostess at Seed Restaurant, one of the “Justice Ministries” the church began in order to focus on caring for those affected by human trafficking, incarceration and homelessness.

“As soon as we planted a church,” Seng says, “the Lord called us to address human trafficking in our city.” They began thinking of ways to help people heal physically, emotionally, spiritually and economically.

Bluewater started recovery and safe homes to provide shelter for women and girls leaving the sex industry, as well as for convicts released on parole. It was easy to bring in the men and women off the streets, but rehabilitation came to a standstill when they couldn’t find jobs for those in the program due to their homelessness, criminal records or chemical addictions.

“Employers tend to shy away from that kind of instability,” Seng says. “I was praying and felt the Lord saying, ‘Well, you give them a job.’”

And so he did. With no background in restaurant management, Seng had a lot to learn about daily operations but found that his biggest lessons came in shepherding and leading the restaurant’s 20 to 25 employees. All of the leaders must not only be good at running a business, but gifted in human rehabilitation too. That’s why it was crucial for them to find capable ministers to work alongside the employees.

Most employees are referred from Bluewater’s various community homes, as well as local homeless shelters that contact them with potential applicants. Positions start out part time and entry level; however, after training, employees have the opportunity to move into other full-time positions like prep cook, sous-chef, hostess or table server.

Pastor Seng sees the restaurant as a small part in a larger expression of the entire faith community at Bluewater Mission, where average attendance is 300. Church members lend much-needed patronage and support to Seed, and Seng’s ultimate desire is to build and nurture a body of believers who are passionate about justice.

“You have to make justice a core value—building a community of generosity and love,” he says. “It’s about people pulling together.”